The Zoologist's fully automatic style makes him a force at close range.

The Zoologist's main perk is his high rate of fire and good damage. While having a faster rate of fire than the Marine Biologist, his damage is slightly lower than the Chemist. The Zoologist is one of the few scientists that can only damage enemies at close range. Though his attack is very high, he suffers from being shot from afar, because he won't be able to fight back. This involves Cacti, and other plants that have high range attacks. While Cacti are very easy to vanquish up close, they can be a danger to Zoologists from afar. So it's better to vanquish them.

In Gardens and Graveyards, it might not be a good idea to head into the Garden, as most plants that are not in the garden could easily vanquish you. Instead, try vanquishing the plants staying back to give your team an advantage. While fighting plants, you should run around them while firing at them. The spread of the attack should hit them even if your crosshairs weren't on them. While fighting Cacti, look out for potato mines because they can instantly kill you.

The Zoologist is a very tough opponent to handle with at close range, even for Chompers. In Gardens & Graveyards or Herbal Assault, it's best to take out the Zoologist from longer distances as a Cactus. As a Rose, use the Goatify or Time Snare at him and vanquish him safely enough, but beware, Time Snare doesn't last as long, so be careful. As Kernel Corn, his Shuck Shot can instantly vanquish the Zoologist for 150 or 300 damage. As a Chomper, it's best to use your Burrow, firing Goop or Super Sticky Goop at him, or vanquishing him from behind if he's reviving his teammates. Once you vanquish him, you'll be safe enough. 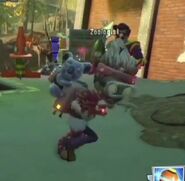 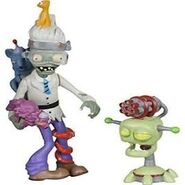 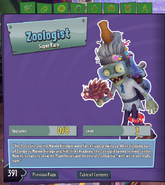 Stickerbook entry
Add a photo to this gallery

Retrieved from "https://plantsvszombies.fandom.com/wiki/Zoologist?oldid=2188819"
Community content is available under CC-BY-SA unless otherwise noted.