.
Snaaaaake!
Zookeeper is a basic common zombie card in Plants vs. Zombies Heroes and a member of the

It does not have any traits, and its ability gives all pet zombies, including it, +1

every time a pet card is played. This ability stacks with each Zookeeper on the field and persists until all Zookeepers are removed from the field. Its closest plant counterpart is Go-Nuts.

It is based on a zookeeper, a person who manages zoo animals that are kept in captivity for conservation or to be displayed to the public.

Its description may be a reference to the famous Konami franchise Metal Gear Solid, where if the player gets a game over, the player can hear the catchphrase, "Snaaaaake!"

Zookeeper is arguably the most important zombie in a pet deck due to its ability. While +1

may not seem much, Zookeeper's ability gives it to all pets on the field, including itself. Since pet decks are supposed to expend many cards for finishing the opponent in a rush, Zookeeper can allow your army of pets to accumulate lots of strength and wreak havoc if used correctly.

On the other hand, Zookeeper's professional tribe benefits very little. Zookeeper does synergize with Zombie Middle Manager and can be used to Evolve Jurassic Fossilhead, but there are better professionals to use for their sakes, and Zookeeper is only viable in a pet deck. Even if you do pack a few professional cards in said pet deck, these two are very ineffective choices and should not be considered. Furthermore, only The Smash can take advantage of this.

But there is one big downside of Zookeeper, and that is its inability to boost health, meaning that your pets will hit hard, but they will also fall very easily. While the

Beastly class does have stat-boosting cards, all of them can only affect one zombie, making them unsuitable for a pet deck, where the ideal setup is swarming as many zombies as you can. The Smash has it easy due to the

Hearty class' access to mass stat-boosting cards like Camel Crossing (which is also a pet card itself) and Going Viral, but the other

Beastly heroes will have a harder time keeping their pets alive. You should at least boost Zookeeper's health as much as possible, because as mentioned before, it is a key zombie in a pet deck.

Another downside of Zookeeper is that it requires you to use up many cards to be effective. Therefore, if your opponent manages to break your setup apart, you will have a hard time rebuilding your defenses. This is even more so due to the

Beastly class' severe lack of card draw. In this case, Immorticia will be at an advantage in terms of constantly supplying cards due to the

Here's a list of pets that will benefit from Zookeeper's ability:

Zookeeper itself is only an average zombie, but its ability is really dangerous, so you have to destroy it as soon as possible. Due to it having just 2 health, you can destroy this zombie pretty easily. If it is played on the second turn, it cannot be boosted, so you can attack it safely.

If its stats get too much for you to handle, you could play an instant-kill trick to destroy it, but damaging cards like Berry Blast are usually more effective as they are more ideal against a Zookeeper setup, where there will be many threats at once, due to instant-kills being more expensive. 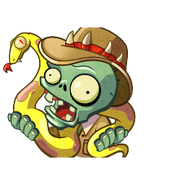 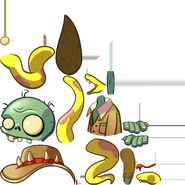 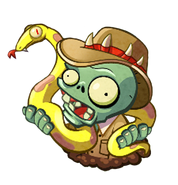 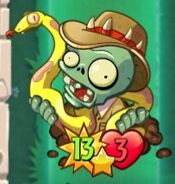 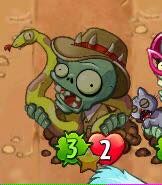 Zookeeper tinted gray due to a glitch

Water Balloons being played on Zookeeper

Cherry Bomb being played on two Zookeepers and Rodeo Gargantuar

Lawnmower being played on Zookeeper

Maniacal Laugh being played on Zookeeper 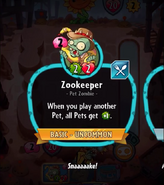