Zomburger Artist is a character in Plants vs. Zombies: Garden Warfare 2. It works at the Zomburger and is a playable character in the Delivery Quests released in the Trouble in Zombopolis: Part Two DLC. The player is required to race through various checkpoints in each quest in an effort to deliver burgers to the respective zombie that ordered them. Completing each quest rewards the player with coins which increase along with the difficulty as new delivery quests are unlocked. Upon completing the 10 quests given to the player, the long-awaited Delivery Badge will be awarded. Zomburger Artist has one ability, the Warper Jr., which allows it to make a small dash forward to gain a temporary speed boost as well as to jump further if used in mid-air. It has a very fast recharge.

Zomburger Artist's primary weapon is Burg Bites, which deals 75 damage and it can be used to take out plant pots that get in the way, as well as Gnome Targets that momentarily freeze the players time quota. 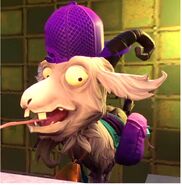 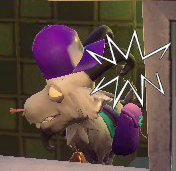 A promotional image and teaser for Zomburger Artist and his missions