watch 32:35
Plants vs. Zombies Garden Warfare 2 Zomburbia Map Reveal Live From PopCap
Do you like this video?
Play Sound

Zomburbia is a Herbal Assault map and the main setting of Plants vs. Zombies: Garden Warfare 2. The plants have returned to their old home and they must reach Z Academy and crash the party, while the zombies are determined to defend it, to honor their new graduates from the university.

The name is a portmanteau of "zombie" and "Suburbia." This is based on the fact that the zombies captured Suburbia and renamed it.

It's that time of the year again. The next batch of fresh Zombie recruits are about to graduate, but the Plants have other plans for them...Hint: It involves toilet paper!

The plants must go in through 4 places to enter Zomburbia. There are 2 breakable walls, an underground passage, and a main gate. Two giant Rocket Bots can be seen on top of the wall next to the gate because of the introduction. Defeat them quickly. Hiding behind the gate is a good strategy for snipers, as the zombies cannot pass the gate, as they will be out of bounds. Utilize the rooftops and sidelines to hit zombies in unexpected places.

The huge area leading to the gate is perfect to take out recently spawned plants going through the middle. However, your team will likely need snipers on the house to protect against sideline attackers.

Like the previous objective, the rooftops will be your friends. Peashooters, Kernel Corns, and even Citrons can get on top of the mansion and snipe from there. Just like the Scientist's House, the objective is in the corner of a house. However, only Foot Soldiers, Super Brainz, and Imps with a bit of parkour will be able to get up there.

Previously mentioned, only a few classes will be able to utilize the heights this time. Focus your attacks based on the teleporter location.

Attacking near their spawn is ideal, since there are many rocks barricading their way, and snipers will have difficulty vanquishing. Hide behind rocks, trees, or cages to hide from fire.

This objective is hard to contain due to all the openings the plants can attack from. Get some up close and personal zombies to deal with the plants.

Both teleporters will lead to different strategies, either by attacking from the front or the side. The house facing the stage is a good spot for plants, though beware, as you're easily seen and other zombies can get up there. There's another house to the side as well, though the same risks apply. Hide in or behind the floats for protection.

The plants must navigate through a lot in order to get to the objective. Snipers are highly recommended.

At the end, the plants must infiltrate Z Academy and ruin their graduation party by throwing toilet paper, destroying monuments, ruining food etc. while the zombies must try to stop them from doing so. The win is decided by either the plants ruining or failing to ruin the party.

If the plants win, then the Zomboss statue that resembles Julius Caesar from Ancient Rome, covered in toilet paper, will explode. The zombies will be standing in the indented square, and the background wall for Z Academy, which says 'R.I.P. Z Academy' and resembles a tombstone, will topple down and crush the zombies, while the plants, who were in front of them on high ground, celebrate their victory as the sky turns back to normal and a rainbow appears.

If the zombies win, the Z Academy will stay standing, while Dr. Zomboss gives a speech that appears to be motivational, judging by Zomboss' gestures, to the new cadets (the zombie players), who are standing in front of chairs. After that, planes fly overhead and it is revealed that Dr. Zomboss is standing on an Imp. The plants are not featured in this ending.

Zomburbia at the start of the game

Dr. Zomboss giving a speech in the animation after zombies have won the final objective
Add a photo to this gallery 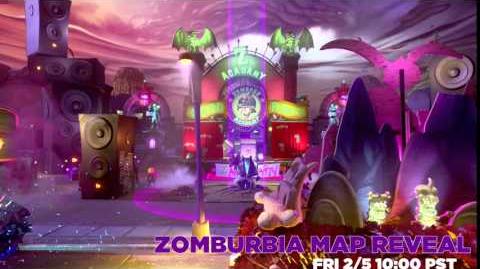 Retrieved from "https://plantsvszombies.fandom.com/wiki/Zomburbia?oldid=2362796"
Community content is available under CC-BY-SA unless otherwise noted.