Not to be confused with the Build-a-Bot in Garden Warfare 2.

It can be upgraded to Zombot Missile Turret (Mark II) and to Rocket Zombot (Mark III), yet it cannot be downgraded back to a lower level once upgraded. There are three near each teleporter and one near the garden. The plant equivalent to it is the Crystal Guardian.

Each Laser deals three damage at close range and two damage at any other range, has approximately 80 health.

Takes three seconds to upgrade from Zombot Turret (Mark I).

Each Missile deals four impact damage and two splash damage at any range, has approximately 95 health.

Each Rocket deals up to 75 critical damage plus 25 splash damage, has approximately 110 health.

Each Rocket deals around 20 damage. Its appearance is the same as Mark III Zombot Turret in the first game but with no pupils and glowing eyes.

When building Zombot Turrets, you need to be aware of what you think you are up against:

The Mark I turret is the best one for dealing with Drones and Peashooters using Hyper. On the other hand, the Mark III turret works well on slower targets like Chompers while the Mark II is a medium between the two.

You also need to be aware of the turrets' placement when building them:

If all turrets are near the teleporter, you should set them up and upgrade the ones that cannot target airborne targets reliably (the ones that are obscured by the environment) to Mark III. This gives you protection against both drones and Chompers.

If the teleporter is located indoors, that makes the Mark I turrets less needed as both Drones and Peashooters using Hyper perform worse in cramped locations with restricted space.

NOTE: There is a fourth Zombot Turret near each Garden, if you are attacking the Garden, try setting it up. Do not bother upgrading it past Mark I, doing so will only put your life at risk and it will lose its ability to target fast-moving targets. 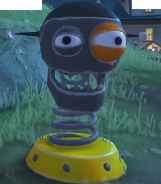 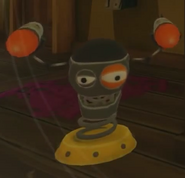 The player being rewarded for having one of there turrets for kill a plant, usually a plant player 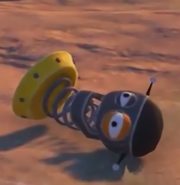 A vanquished Zombot Turret (Mark I)

A pile of junk, waiting to be built into a Zombot Turret (Mark II)