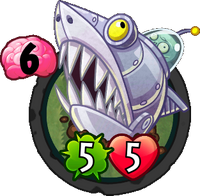 For the version in Plants vs. Zombies 2, see Zombot Sharktronic Sub.

When a Plant gets hurt, destroy it. When any Plant is destroyed, this gets +1

.
Ever dream of piloting a giant shark robot? Join Dr. Zomboss now!
Zombot Sharktronic Sub is a premium legendary zombie card in Plants vs. Zombies Heroes and a member of the

. It has the Amphibious trait, and its ability destroys a plant instantly after that plant takes damage in any way and gives Zombot Sharktronic Sub +1

every time a plant is destroyed.

Deadly, making it an effective field-clearer that gets stronger. However, this also means that you must have good zombie support across the field, as Zombot Sharktronic Sub cannot clear the field on its own; even a swarm of weak zombies will suffice.

The best lane to play this zombie is on an aquatic (rightmost) lane to maximize the number of plants it destroys (which matters due to its ability) before finally attacking itself. Zombot Sharktronic Sub can also make use of its Amphibious trait there, keeping it safe from many things. However, keep in mind that your opponent can still Bounce or destroy this zombie beforehand to make its stat boosts go to waste.

Furthermore, this card is a great counter for plants that are hard to take down otherwise, such as Soul Patch, Doubled Mint, Hibernating Beary, or Water Chestnut. It also punishes Galacta-Cactus users heavily, as Galacta-Cactus will damage (and destroy) all your opponent's plants for you if it is destroyed.

Sneaky hero has their own strategies with Zombot Sharktronic Sub:

Additionally, zombies with the

Strikethrough trait, such as Hot Dog Imp, Line Dancing Zombie, and Zombot Plank Walker, can hurt and destroy both plants at once (if there are two on said lane), and even hit your opponent behind.

This zombie can be very powerful, as it essentially makes anything that does damage

Deadly. Not only that, it gets stronger every time a plant is destroyed. If you don't deal with it quickly, Zombot Sharktronic Sub will grow out of control easily.

One way to counter it is to prevent your plants from taking damage, such as protecting them with Peel Shield or Root Wall, moving plants or zombies so that your plants don't get hurt, or simply destroying all other zombies. However, beware of zombies whose ability can target other lanes.

As a last resort, you should destroy it with instant-kill or damaging cards like Squash, Shamrocket, or Berry Blast. If those are not options, you can stall it by either bouncing or freezing it, not to mention that you can activate Winter Squash's ability if you do the latter.

Armored or shielded, because it will simply destroy all of them and gain a major strength boost.

Retrieved from "https://plantsvszombies.fandom.com/wiki/Zombot_Sharktronic_Sub_(PvZH)?oldid=2296392"
Community content is available under CC-BY-SA unless otherwise noted.