None (Unlocked after reaching Level 3 with the Engineer)
The Zombot Drone, also known as "ZED" can attack Plants from above and call in devastating Cone Strike.
Zombot Drone is one of the Engineer's abilities in Plants vs. Zombies: Garden Warfare. It is an aerial drone that can be controlled by Engineer. Its primary weapon is Zombot Laser, which deals seven to eight impact damage and the critical damage is 10, which is maximum damage.

It can also call in a Cone Strike in which each Cone Bomb can deal up to 70 damage. The Cone Strike takes ten seconds to recharge. Although it is fast and can maneuver very easily, it is very fragile and has a limited flight. It takes 60 seconds to recharge. Its plant counterpart is the Garlic Drone. It does not return in Plants vs. Zombies: Garden Warfare 2, as it is replaced by the Parrot Pal ability of Captain Deadbeard.

The Zombot Drone, also known as "ZED" can attack Plants from above and call in devastating Cone Strike.

When using the Zombot Drone, find somewhere to hide first. Options are behind a wall, or at your base as long as it’s out of sight. You will not be able to fend off any plants near your engineer’s position unless you exit drone mode, thus, destroying the drone. Also, keep in mind that being hurt in any way while flying the drone will destroy it too. When flying as the drone, try using your Zombot Lasers to take out lone stragglers, or a sniping Cactus. Use the Cone Strike to ambush the garden.

The Zombot Drone can be very hard to shoot at, let alone aim towards, because of its speed. It can also vanquish you with the Zombot Laser if you do not pay attention. When you see one, shoot it while moving to avoid getting hit. Don’t waste any abilities attempting to destroy the drone. Cone strikes will make a distinct hiss when they land, and have a short delay before exploding, so attempt to distance yourself from them the best you can to avoid damage. If you can find the engineer piloting the drone, try to vanquish it or as a Chomper, swallow it whole. 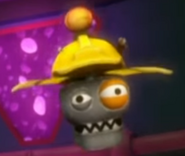