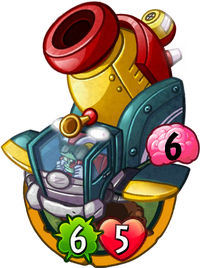 When revealed: Zombies can't be hurt this turn.
Not space legal in 35 different galaxies.
Zombot Battlecruiser 5000 is a galactic legendary zombie card in Plants vs. Zombies Heroes and a member of the

. It has the Gravestone trait, and its ability shields all zombies, including it, for the turn it is revealed.

Not space legal in 35 different galaxies.

This zombie seems to have mundane stats for its cost. In fact, however, Zombot Battlecruiser 5000 is a really powerful zombie on its own, with an incredible ability that prevents every zombie on the field from taking damage and being destroyed for one turn (unless they are destroyed by Briar Rose's ability) and the Gravestone trait.

To maximize Zombot Battlecruiser 5000's ability, try to fill every lane but one with zombies (the remaining spot will be reserved for Zombot Battlecruiser 5000 itself). Also, as Z-Mech, do not pair this with zombies with "When hurt" abilities like Newspaper Zombie (unless it is already damaged and has high strength) and Jester, as they will be unable to activate their abilities.

Planetary Gladiator is a good pair with this card, redirecting any damage that is supposed to go to you to himself, and since he is shielded, both you and him (and any other zombie on the field) are basically invulnerable for the turn Zombot Battlecruiser 5000 is played, in a similar fashion to Uncrackable and Peel Shield combined. On top of that, this combination can be used by all Hearty heroes.

Neptuna has very good synergy with this card; she can take advantage of its Gravestone trait with Headstone Carver, or play Mixed-Up Gravedigger or In-Crypted to reactivate its ability on the next turn. Rustbolt can use it in a science deck, where he can continuously boost its strength with Zombot Drone Engineer, then lead up with a devastating bonus attack via Gadget Scientist. If he gets lucky, he can Conjure one using Cosmic Scientist, making Zombot Battlecruiser 5000 even more formidable thanks to its newly gained

Because of its Gravestone trait, all Guardian and Smarty heroes, especially Citron and Beta-Carrotina, can simply target it with Grave Buster, Blockbuster, Spyris, Winter Squash + Cool Bean, and Grave Mistake if you are facing them, so keep that in mind.

If you see that a Hearty hero has spent 6 brains on a gravestone, there is a good chance it is Zombot Battlecruiser 5000. For starters, since this zombie hides in a gravestone, you can easily remove this zombie using Grave Buster, Blockbuster, or Grave Mistake. If anti-gravestone cards aren't an option, you can use plants with instant-kill abilities. However, Briar Rose is the only plant that can do that, since Eyespore, Cob Cannon, Witch Hazel, and Winter Squash have no way of destroying a shielded zombie after the Plants Play phase until the end of the turn. Fortunately, Briar Rose does a good job on removing lots of shielded zombies, provided there are enough flowers on the field. It is also best to get rid of any Planetary Gladiators beforehand, because otherwise, nothing will be able to hurt your opponent on the turn Zombot Battlecruiser 5000 is played, even if there are empty lanes.

Do not play glass cannons such as Magnifying Grass and Carrotillery, as their one attack will mean nothing, wasting said glass cannons.

As a last resort, try to destroy all other zombies before it is revealed to prevent most of the zombies from being protected this turn.

But even without its ability, Zombot Battlecruiser 5000 has great raw stats, so it can be tough to destroy it even after the turn it is played. It is best to deal with it using instant-kill tricks such as Shamrocket, Squash, and Lawnmower. In this case, using a glass cannon like the aforementioned Magnifying Grass will also work. Sizzle can also take it out if unboosted. 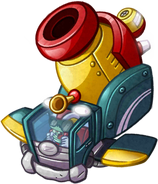 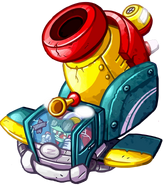 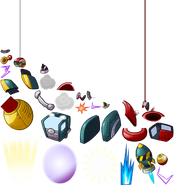 Zombot Battlecruiser 5000 tinted gray due to a glitch

Gigantic Zombot Battlecruiser 5000 due to a glitch

Zombot Battlecruiser 5000 with a star icon on its health 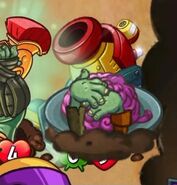 Lurch for Lunch being used on Zombot Battlecruiser 5000