For the version in Plants vs. Zombies 2, see Zombot Aerostatic Gondola.

When this hurts the Plant Hero, it moves to a random lane and leaves behind a random zombie.
These pirates hit hard, then escape at 3 miles per hour.
Zombot Aerostatic Gondola is a colossal legendary zombie card in Plants vs. Zombies Heroes and a member of the

. It has the Amphibious trait, and its ability moves it to a random lane every time it hurts the plant hero, and makes a random zombie in its original lane.

These pirates hit hard, then escape at 3 miles per hour.

Zombot Aerostatic Gondola is a very expensive card, at a hefty cost of 6, so you will need to make use out of it in the late game as a finisher. Furthermore, it is advised to only use this if you have field control, as your opponent can otherwise easily deal with Zombot Aerostatic Gondola, wasting your brains, or even just directly damage you.

If you are going to use this card, make sure to bring removal cards like Backyard Bounce and Pogo Bouncer or moving cards like Smoke Bomb. If not, your opponent can simply play weak plants to block it from damaging your opponent, preventing its ability from activating.

This card is best used as soon as you can play it. However, as mentioned before, due to the randomness of its ability, it might not give zombies that can work well with your deck, like Flamenco Zombie in a non-dancing deck, or weak ones like Conehead.

In terms of placement, it is best to play it on the leftmost lane to activate its ability a few times, or on the aquatic lane to protect it from bigger threats such as Lawnmower or Super-Phat Beets.

Since it belongs to the

Sneaky heroes can use this with the aforementioned Backyard Bounce and Pogo Bouncer, or use it in their pirate deck alongside Captain Flameface and Swashbuckler Zombie. While Laser Base Alpha and Ice Moon can also give Zombot Aerostatic Gondola the

Strikethrough trait, it will move away from it, losing the trait, meaning if it moves to a lane with a plant in it, its ability cannot be activated again. Also, Laser Base Alpha can be replaced before Zombot Aerostatic Gondola can even attack, preventing its ability from activating. Captain Flameface, on the other hand, ensures that it will always have the trait no matter where it moves, allowing it to activate its ability multiple times. Swashbuckler Zombie can be used to boost Zombot Aerostatic Gondola every time its ability activates, but he won't be able to stay around for long due to his low stats by that point.

This zombie is dangerous as it can make new zombies that you will also have to deal with. It becomes more dangerous in a pirate deck due to Captain Flameface giving it the

Strikethrough trait, allowing it to activate its ability every time it attacks. However, its base strength makes it vulnerable to Shamrocket and Doom-Shroom. You can also try to block it with plants or redirect the damage with Soul Patch since its ability only activates when it hurts the plant hero. 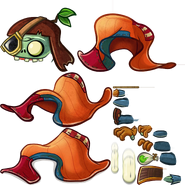 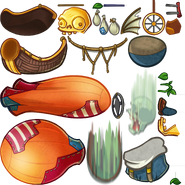 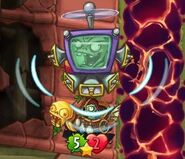 Zombot Aerostatic Gondola with the

Zombot Aerostatic Gondola being the featured card in the menu for the December 3rd, 2017 Daily Challenge