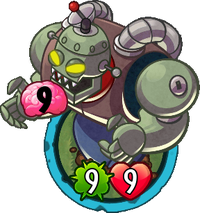 When played: Destroy all Plants.
The first 999 Zombots are now considered classics.

Zombot 1000 is a premium legendary zombie card in Plants vs. Zombies Heroes and a member of the

to play and has 9

. It does not have any traits, and its ability instantly destroys all plants on the field when it is played.

Its description may be implying that it is the 1000th Zombot made.

With outstanding stats of 9

and the ability to destroy all plants on the field, Zombot 1000 is a huge carry if played properly. Generally though, this should be played as a last resort rather than a finisher, as there are better and cheaper finishers anyway.

Anti-Hero zombies such as Stealthy Imp and Walrus Rider, as well as

Bullseye zombies such as Shieldcrusher Viking greatly benefit from its ability since there will be no plants in their way, enabling quicker/safer takedown. However, these combos are only normally possible as Brain Freeze and Immorticia, respectively.

Unfortunately, zombies play first, so do note that even though Zombot 1000 will allow you to catch up by clearing your opponent's plants, your opponent can rebuild their defenses, destroy Zombot 1000 (or block Zombot 1000 with a cheap plant), and then push for a win after you play it. Its late-game accessibility also makes it helpless against rush decks, and a late-game control deck is pretty much necessary to run it. To get around the first issue, you can activate Zombot 1000's ability after the Plants Play phase via Teleport, Teleportation Zombie, Graveyard, Cursed Gargolith, or Mixed-Up Gravedigger, or play it when your opponent has very few or no cards left in their hand.

Since this is a science zombie, Immorticia can have it benefit from Zombot Drone Engineer and Gadget Scientist, and activate Interdimensional Zombie's ability. However, Interdimensional Zombie is not fit for the late game, even after considering his ability, nor can he survive for multiple rounds. Also, due to it being a Gargantuar zombie, you can give it an offensive trait with Smashing Gargantuar or Wizard Gargantuar for more devastating results, turning it into an unstoppable heavy hitter that can wreak havoc against your opponent easily. For non-offensive synergy, King of the Grill can draw lots of gourmet cards when it activates its ability to destroy all plants, The Smash can have some Gargologists on the field to play it earlier, and Brain Freeze can combine it with Cursed Gargolith to activate its ability every turn, dooming his opponent if they don't have the right cards.

But if Grapes of Wrath or Punish-Shroom along with many mushrooms is on the field, you must be wary of playing Zombot 1000 as you will receive a significant amount of damage unless you block it.

Due to its ability to destroy every single plant on the field when played, it can easily punish you for swarming the field with plants (and playing tricks to benefit them). If you are against a Beastly hero running a late-game control deck, do not spend all your cards recklessly should you go late into the game, but instead, try to save some cards so you can rebuild your defenses if they are ravaged by Zombot 1000; otherwise, it is very likely that you will be defeated soon. Also, make sure you have a card that can either instantly destroy it, such as Lawnmower, or at least stop its attack, such as Iceberg Lettuce, because even after its ability has activated, Zombot 1000 is still a force to be reckoned with its massive stats.

Unless you are sure that you can win this turn, do not attempt to use Spring Bean or any other Bouncing card on it. This will only allow Zombot 1000 to be played again later on and let it wreck your defenses once more.

However, the best strategy is to win the game before Zombot 1000 can be played; since it can only be played starting from turn 9, you should have no problem defeating your opponent with the right deck. But beware of Immorticia's ramp setup and The Smash's brain cost-lowering zombies (Flag Zombie and Gargologist), as they will allow Zombot 1000 to be played earlier.

Retrieved from "https://plantsvszombies.fandom.com/wiki/Zombot_1000?oldid=2218556"
Community content is available under CC-BY-SA unless otherwise noted.