Do 3 damage. If there is a zombie in every lane, this does double damage.
Dr. Zomboss believes that there's no problem that can't be solved by a giant robot.
Zombot's Wrath is a premium rare zombie trick card in Plants vs. Zombies Heroes and a member of the

to play, and its ability does 3 damage, or 6 damage if there is a zombie on every lane, to a selected plant or the plant hero.

It's name and appearance are both references to the Zombot in the original Plants vs. Zombies. However, it only fires fireballs (similarly to Zombot 1000) instead of both fireballs and iceballs like the referenced Zombot. Its description is a reference to the fact that in both Plants vs. Zombies and Plants vs. Zombies 2, Dr. Zomboss will always use a zombot to combat the player in each world's final level (as well as in other modes and quests).

Dr. Zomboss believes that there's no problem that can't be solved by a giant robot.

Normally, Zombot's Wrath is a more expensive and less cost-effective version of Bungee Plumber, or as a more expensive substitute for Electrobolt. Their uses are relatively similar; you can use it to destroy bothersome plants like Sunflower, or potentially threatening plants like Pea Pod and Doubled Mint, or use it to deliver the finishing blow or bait out your opponent's Super-Block Meter block. Like Electrobolt, it is also useful for destroying strong plants with 3 health such as Sportacus and Guacodile.

If you are playing as Z-Mech, it is wise to combine Zombot's Wrath with Gargologist as it's a Gargantuar trick and becomes much more cost-effective (being able to do 3 damage for 1

). This effectively makes Zombot's Wrath a direct upgrade to Bungee Plumber as long as a Gargologist stays on the field. Due to it also being a science card, Professor Brainstorm can use this to transform Interdimensional Zombie, or use Wizard Gargantuar to give it

Bullseye. It can also be Conjured by Cosmic Scientist to give it Bullseye.

The card's secondary ability can potentially make it one of the most powerful straight damage options in the entire game, but it is hindered by the sheer difficulty of playing and maintaining zombies on every lane (this is not helped by the fact that the Crazy class lacks Amphibious zombies). Only Electric Boogaloo and Impfinity have reliable access to Amphibious zombies, while Professor Brainstorm and Z-Mech have to rely on Imp-Throwing Gargantuar and Gargantuars' Feast (and Eureka in case of the former). Therefore, it should be assumed that this secondary ability would rarely come into effect, and you should not try to fully commit to making it work.

If you do want for it to do double damage, however, your best bet would be Impfinity; not only does his signature superpower, Triple Threat, allow for potential zombies filling the aquatic lane early on, but he also has an abundant supply of cheap

Sneaky zombies that could allow him to swarm the field quickly. Additionally, Swabbie is free and has Amphibious after all, so it can allow you to play this on turn 3 if you have enough of them, provided your opponent does nothing to remove them.

Like Bungee Plumber, this card would be used to either remove a plant, weaken a tough plant, or potentially land the finishing blow on you. Hence, any strategy that is against Bungee Plumber would also apply to Zombot's Wrath. Ensure theres the zombies have at least one open lane at all times to prevent the damage output from being doubled. 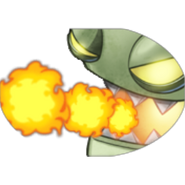 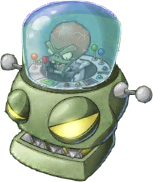 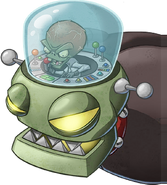 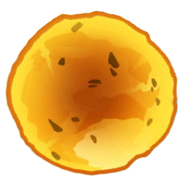 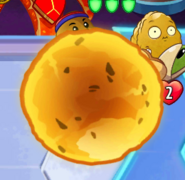 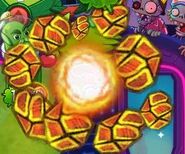 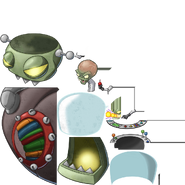 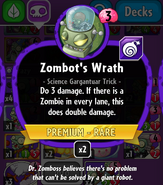 The player receiving Zombot's Wrath from a Premium Pack