It also appears in the Graveyard Ops objective "Protect the Zombomb", where the zombies need to protect it until the round ends, resulting in coins earned from the Zombomb when it explodes.

In Plants vs. Zombies: Battle for Neighborville, two Zombombs in blue and yellow shirts will move towards the pickle enhancer in Preserve Pastures when zombies are nearby.

Its plant counterpart is the Squash.

Its name is a portmanteau between the words "zombie" and "bomb."

Using the Chili Bean Bomb or the Sombrero Bean Bomb is the best choice. Do not get too close to it, or you will be launched away. Using the Pea Gatling is a good choice when it comes to a safe distance.

The Sun Pulse or the Sunbeam is a good choice when you are far from it, but take care of the Browncoat Zombies while you are at it. You can use the Heal Flower + Sunbeam or Sun Pulse technique.

The Zombomb will not target you, so you have the advantage to shoot Goop at it, which will slow it down.

The Garlic Drone is recommended, so you can shoot at it from a secure distance. You can also drop Potato Mines on its path to deal damage to it.

Keep firing your laser, but let go of the trigger before it overheats and wait for about a second before firing again. EMPeach it to keep it at bay and roll away if it gets dangerous.

Slow the Zombomb down with Time Snare and keep firing.

Fire everything you got, especially Shuck Shot. Jumping over it with Husk Hop is also a great way to stall and damage it.

If many enemies are crowding the Zombomb, use Fung Fu to hit them all at once. Otherwise, just keep on firing. Use Casting Shadows or Shadow Sneak if your health gets too low.

Get up close and use Flame Blower until it is about to overheat, then wait for a moment and start again. Swoop Slam will help you get close to the Zombomb, while Blue Blazes and Blazing Trail will get some more damage in. It is not recommended to use Flare Ball, as it is not damaging enough.

Become an Oak so you're more powerful. While Acorn has Sap Trap, Oak has Super Sap Trap, which does much more damage. Wood Grief and Roll for Damage will help remove the Zombomb's health. 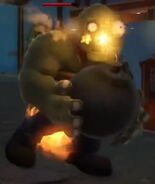