less.
"If you don't pay attention in class, you'll never improve your brains..."

Zombology Teacher is an event zombie card in Plants vs. Zombies Heroes and a member of the

. She does not have any traits, and her ability reduces the cost of all zombie tricks in the zombie hero's hand by 1

She didn't have her own Weekly Event, but instead, she was added in a special "Back to School" bundle sold for real money on the last week of August and first week of September 2017.

She is based on a teacher, a person who helps others to acquire knowledge, competences or values.

"If you don't pay attention in class, you'll never improve your brains..."

Zombology Teacher has average stats for her cost, but her ability makes her very useful, being able to reduce the cost of all tricks for a cheap price. If you play her on the first turn, she can let you play some cheap yet devastating tricks that can ruin the plant hero's strategies if she is not destroyed, such as Bungee Plumber, Rolling Stone, and even superpowers. Having multiple Zombology Teachers on the field will allow you to play many tricks in one turn, allowing you to deal some massive damage to the plant hero or their defenses. You can also pair her up with Defensive End to lock down on the plant hero, with more tricks at your disposal and less tricks for the plant hero.

However, while she is useful for the early game, she loses her value in the late game, as you will already have enough brains for tricks, essentially making her ability insignificant. Additionally, she has very low stats, meaning the plant hero can easily destroy her if not boosted. Also, if you are not careful, you may play all your tricks in a few turns, resulting in no tricks for the late game, meaning you must be watchful over your tricks, or use cards that draw more cards. This can be an even harder challenge for Z-Mech and The Smash, who lack easy ways to draw cards.

Because of her science tribe, Rustbolt can put her in a science deck with Zombot Drone Engineer, Gadget Scientist, and Interdimensional Zombie for the purpose of synergy, but there are better science zombies to synergize with than Zombology Teacher. Instead, she in better off in trick decks alongside Paparazzi Zombie, Thinking Cap, and Trickster, as Paparazzi Zombie will be boosted out of control thanks to Thinking Cap's Conjured superpowers being free, which further decreases Trickster's cost, allowing him to be played earlier.

A strong combo you can do is to play this, and then Secret Agent. This allows you to play a boosted Zombology Teacher on turn 2, so your opponent will have to play stronger cards to destroy her. However, this combo can only be performed normally by The Smash.

This zombie may not look intimidating at first, but don't let that fool you. Her ability can potentially ruin your strategies for the early game and, if boosted, she can end up turning the tide of battle in the zombie hero's favor. Fortunately, there are many easy ways to stop her. Damaging or destroying tricks such as Banana Bomb and Whack-a-Zombie are the most trustworthy means of taking her out, as they can destroy her and also remove her ability before the zombie tricks phase. Any plant that can deal at least 1 damage can also destroy her, but beware, as the zombie hero may have some cheaper tricks to destroy or nullify that plant. Sour Grapes can also take her out if she is not boosted. 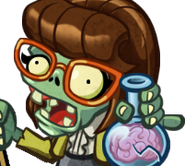 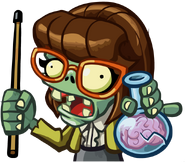 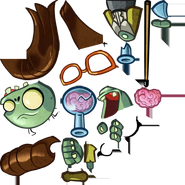 Zombology Teacher on the field 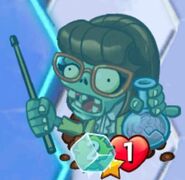 Zombology Teacher on the advertisement for the Back To School Sale

Zombology Teacher on the advertisement for the Back To School Bundle

A notification about Zombology Teacher

Zombology Teacher on the advertisement for the Back To School Bundle

Zombology Teacher being the featured card in the menu for the September 10th, 2017 Daily Challenge

Barrel of Barrels being used on Zombology Teacher 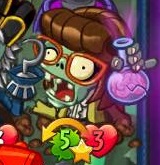 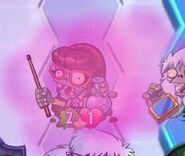 Going Viral being played on 2 Zombology Teachers and Leprechaun Imp.
Add a photo to this gallery

Retrieved from "https://plantsvszombies.fandom.com/wiki/Zombology_Teacher?oldid=2249050"
Community content is available under CC-BY-SA unless otherwise noted.