Zombies on Your Lawn

The music video, in which the lead singer is a Sunflower, was used as a promotional piece for the game as well as being the credits. In Xbox Live Arcade and PlayStation Network editions, it plays when the player beats the game, video inclusive.

The song appears as Track 15 on the Plants vs. Zombies Original Soundtrack.

The song as a file.

The Sunflower in the beginning of the song

The zombies gathered at the player's frontyard at Day

The zombies gathered at the player's backyard pool at Day

I know your type: tall, dark, and dead 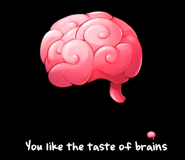 I know you have a lot of food on your plate 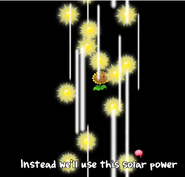 Instead we'll use this solar power

Sunflower on the podium in the Modern Day part 1 trailer

Several zombies on the lawn coming from different time periods

Shrinking Violet shrinks every zombie on the lawn