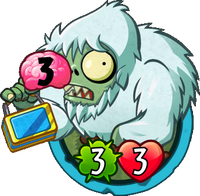 When played: Gain a Yeti Lunchbox.
End of turn: Bounce this Yeti.
Enjoys warm hugs.
Zombie Yeti is a premium super-rare zombie card in Plants vs. Zombies Heroes and a member of the

. They do not have any traits, and their ability adds a Yeti Lunchbox into the zombie hero's hand when they are played and gives them the Bounce effect at the end of the turn they are played.

While their namesake is from their original debut, their ability to add a Yeti Lunchbox into the zombie hero's hand is a reference of his Plants vs. Zombies 2 variant.

Their ability to Bounce back into the player's hand is a reference to how they would try to flee from the player in the main series games.

Their description is a reference to Olaf from the movie Frozen, a snowman created by Queen Elsa who likes giving out warm hugs.

Zombie Yeti doesn't seem very useful with their average stats and lack of traits, and neither does Yeti Lunchbox. However, much of Zombie Yeti's value comes from their Bouncing ability, which allows you to play them multiple times until they are destroyed - while they aren't an auto-include for all Beastly decks, Zombie Yeti has their places in several decks due to it.

A major deck that Zombie Yeti shines in would be pet decks, where a single Zombie Yeti can activate Cat Lady's and Zookeeper's abilities multiple times. While Zombie Yeti isn't really much of a spammable card, them being able to basically "refund" themselves (if they survive) is very valuable in pet decks since they have to use up many cards to be formidable. Not only that, the Yeti Lunchboxes given by Zombie Yeti are also pet tricks, which help you strengthen your pets even more.

Another type of deck would be Immorticia's trick decks, which focuses more on the Yeti Lunchboxes. Zombie Yeti's main role here is to constantly supply Immorticia with cheap tricks thanks to their Bouncing ability, which allow her to activate Paparazzi Zombie's, Trick-or-Treater's, Mad Chemist's, and Trickster's abilities, as well as provide a zombie a little boost. Speaking of Immorticia, she can also teleport them in during the Zombie Tricks phase onto a safe lane, as her opponent can play a hard-hitter to put an end to Zombie Yeti quickly. In addition, Immorticia can play a Zombie Yeti on a Medulla Nebula to allow it to be cleared every turn, giving her space to get extra brains.

Zombie Yeti is also helpful at activating Dino-Roar abilities, and the Yeti Lunchboxes they give can be made free via Dr. Spacetime and Zombology Teacher since they count as Conjured cards and tricks respectively.

However, Zombie Yeti's Bouncing ability is also their greatest weakness. Zombie Yeti must survive a turn of combat before returning to your hand; while that is relatively easy in the mid game where they can be first played, it will be much harder as the turns go on. While you could boost Zombie Yeti's stats, the boost will be lost when they are Bounced, and Zombie Yeti isn't exactly a zombie you would want to waste your boosts on unless they were to land the finishing hit. You can, however, use environments, as their boosts will last until they are overridden, and not all opponents may bring ones of their own.

It is not recommended to play it when Jelly Bean is on the field, as it will take advantage of it once it gets Bounced.

Zombie Yeti isn't much of a threat themselves, but their Bouncing ability proves them annoying if you don't deal with them quickly.

Just like most zombies, removal is probably your best option when destroying Zombie Yeti. Whack-a-Zombie and Berry Blast are probably the best examples out of them, as they are able to destroy Zombie Yeti as soon as they get played. If you have no choice but to use plants, do not play any combo of plants that does less than 3 damage total (or less than 4 if you think your opponent will play Yeti Lunchbox on Zombie Yeti), as Zombie Yeti will survive and return with full health. But try not to Bounce him unless they are preventing you from finishing off your opponent, as your opponent can get another Yeti Lunchbox (although giving only one isn't a "When played" ability you would want to avoid the most).

Zombie Yeti's Yeti Lunchboxes are also worth taking caution. While Yeti Lunchbox provides only a weak boost individually, it is its synergy in numbers you should worry about more. Being both a pet card and a trick, Yeti Lunchbox can be spammed en masse in the right deck to cause the zombies to snowball in stats. If you fear that outcome, either focus on removing your opponent's stronger zombies before they get boosted, or punish them with instant-kills when they grow too much if you failed to destroy Zombie Yeti early.

Be sure to remove any Dr. Spacetimes or Zombology Teachers on the field, because if you don't, you are going to have to deal with a free Yeti Lunchbox.

It is strongly recommended to have Jelly Bean on the field. This is to punish your opponent for playing it once it gets Bounced. 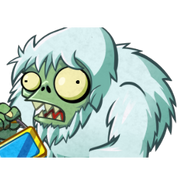 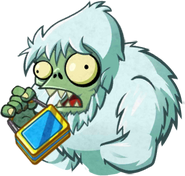 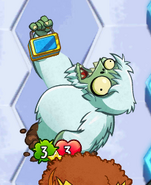 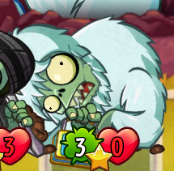 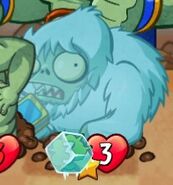 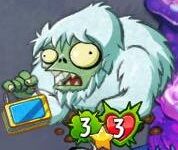 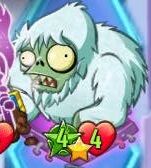 Zombie Yeti with a star icon on his strength 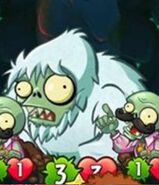 Gigantic Zombie Yeti due to a glitch 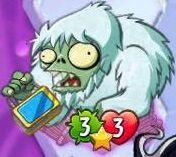 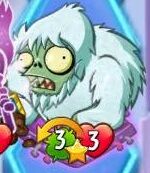 Devour being played on Zombie Yeti

Squash being played on Zombie Yeti

Zombie Yeti on the advertisement for the Brain Freeze Ally Pack

Zombie Yeti on the advertisement for the Food Fight Bundle

Zombie Yeti on the advertisement for the Food Fight Mega Bundle

The player receiving Zombie Yeti from a Premium Pack

The player receiving Zombie Yeti from a Premium Pack