There is a high concentration of Pole Vaulting Zombies in this level. This mini-game is not available in the Nintendo DS and Nintendo DSiWare versions. 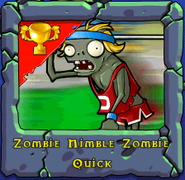 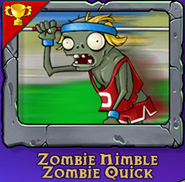 iPhone, iPod Touch, and Android icon
Add a photo to this gallery

Snow Peas, Kernel-pults, Ice-shrooms, and Winter Melons are useful here because they slow down and paralyze the zombies, as the zombies move faster than normal. Tall-nuts are also useful because they block the jumping zombies: Pole Vaulting Zombies and Dolphin Rider Zombies. Split Peas and Gloom-shrooms can also be used instead of Tall-nuts because they can still attack Pole Vaulting Zombies and Dolphin Rider Zombie after jumping over them. Planting cheap plants, like the Lily Pad, Puff-shroom and Sunflower, can stall the jumping zombies if necessary. You can also use your strategy for a normal Pool level and strategies against Pole Vaulting Zombies, but you should beware of the speed that the level is played so you can't react too quickly.

Another Starfruit strategy by William7777

Retrieved from "https://plantsvszombies.fandom.com/wiki/Zombie_Nimble_Zombie_Quick?oldid=1725642"
Community content is available under CC-BY-SA unless otherwise noted.