when another Professional gets hurt.
When played: Conjure a Professional.
Like most managers, bringing pain to his employees gives him strength.
Zombie Middle Manager is a colossal uncommon zombie card in Plants vs. Zombies Heroes and a member of the

when a professional zombie, excluding him, takes damage and Conjures a professional card when he is played. His closest plant counterpart is High-Voltage Currant.

He is based on middle management, the intermediate management of a hierarchical organization that is subordinate to the executive management and responsible for at least two lower levels of junior staff.

His description references his first ability.

Like most managers, bringing pain to his employees gives him strength.

, but he has a nice ability while potentially getting stronger from the hurt Professional. When you play this, you will Conjure a professional card, which can be either handy like Bungee Plumber, or powerful like Mixed-Up Gravedigger or Kitchen Sink Zombie.

If you want to utilize his first ability well, it is best to play him on the fourth lane and adding other professional cards like Planetary Gladiator and Paparazzi Zombie to increase his strength. You will also want health-boosting tricks to make sure he and the other professionals don't get destroyed.

zombie. However, due to his low health, your opponent can destroy it before it Evolves. Therefore, Planetary Gladiator is generally a better option.

Z-Mech can use this with Fireworks Zombie to boost his strength by a lot at the cost of his health, while The Smash can play Secret Agent so that he can replay it to Conjure another professional card, on top of giving him a big boost. As Neptuna, you can use In-Crypted or Mixed-Up Gravedigger to make him hide in a gravestone to reactivate his second ability while preserving her brains. Dr. Spacetime can also help as you will immediately Conjure a cheaper professional card.

Here is the list of zombies he can Conjure:

Alone, this card is not threatening. Since he has low stats, something simple like Banana Bomb can easily take him out. The problem lies in his ability to Conjure a professional and boost his strength. Due to this, beware of health-boosting tricks that your opponent plays on him. If he becomes too much of a problem due to his strength, play Shamrocket or Squash. If he is played on turn 1, it is important to destroy him, as your opponent may play Jurassic Fossilhead on him, easily giving themselves an edge over you. 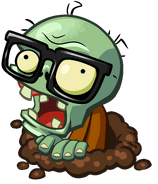 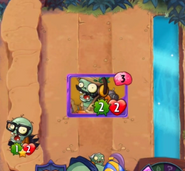 Zombie Middle Manager with the

Zombie Middle Manager with the 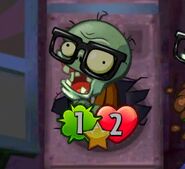 Zombie Middle Manager tinted gray due to a glitch

Zombie Middle Manager being the featured card in the menu for the December 1st, 2017 Daily Challenge