For the version in Plants vs. Zombies Heroes, see Zombie King (PvZH).

Dark Ages - Night 16
As Shakespeare once wrote, "Uneasy lies the head that wears a crown." And Zombie King couldn't agree more. It is incredibly difficult to get a good night's sleep with a crown on your head. That thing is all kinds of uncomfortable.
Zombie King is the tenth zombie encountered in Dark Ages. This zombie's main role is to provide a boost in toughness to Peasant Zombies, Conehead Peasants, and Buckethead Peasants by granting them knight helms and transforming them into Knight Zombies. The Zombie King does not move; an Announcer Imp will appear on a tile in the rightmost column, blow a horn, and the Zombie King will fall down and crush the Announcer Imp along with any plants on the Zombie King's respective tile. He has also been seen moving onto the rightmost tiles but never more than this. He will then remain on that tile until it dies.

He will fall down on the Announcer Imp on the rightmost column of any row, or simply move there on its own. He will remain there and convert all Peasant Zombies near it into Knight Zombies.

He has a brown beard and a golden crown on its head. It sits on a throne and holds a scepter. He has a red fur coat and a purple shirt, He also wears a red ring on his right hand. Zombie Kings wear lime green colored pants and a pair of brown shoes. The horn blown by the Announcer Imp can be seen under the throne of Zombie King, as well as one Imp hand and a leg, too.

As Shakespeare once wrote, "Uneasy lies the head that wears a crown." And Zombie King couldn't agree more. It is incredibly difficult to get a good night's sleep with a crown on your head. That thing is all kinds of uncomfortable.

When you see this zombie on the lawn, kill it quickly or destroy all the Peasant Zombies as fast as you can because it will slowly transform all those zombies nearby into Knight Zombies, who absorb a lot of damage. An easy way is to use Primal Potato Mine on nearby Peasant Zombies to kill it instantly as they have splash damage. Although it does not move, close-range plants like Snapdragon and Bonk Choy are useless (unless fed with Plant Food), as other zombies will quickly overwhelm them. Chompers and Toadstools are also useless as they cannot devour the zombie and can only damage it. In addition, avoid using Homing Thistles and Coconut Cannons as they can easily be distracted by other zombies or any nearby tombstones, unlike most offensive plants. The best strategy to deal with it is to put a column of Magnet-shroom, as they will attract Knight Helms, making the Peasant Zombies useless. However, Zombie Kings can immediately replace them back, meaning defeating the zombie afterwards must be done quickly. Because of that, avoid using Citrons as when they destroy the knight helm, the helms will be immediately granted back, thus wasting their previous attacks and causing them to have a hard time destroying the Peasant Zombies. Butter from Kernel-pult may help, especially when fed with Plant Food, ensuring no Peasant Zombies can be granted Knight Helms. Garlic are somewhat useful as it is possible to lure them away into other lanes, where the player will have less trouble taking them out. Spikeweeds and Spikerocks cannot be placed on Zombie Kings, and will be crushed when a Zombie King appears. Brute force from your plants will also work if you have enough fire-power. This is especially true if the hypnotized zombie is granted a knight helmet as it would allow the hypnotized zombies to survive longer. Shadow-shrooms are useful (especially with Plant Food) as they will ignore all helms and destroy the Peasant Zombies instantly. Banana Launchers and Missile Toes are also useful as they can send a powerful attack to any tile on the screen. The Hypno-Shroom and Caulipower can be used to Hypnotize zombies, and since Zombie King does not attack by himself, he becomes an easy target. It's recommended to use them on any peasant zombie (except for the flag zombie, as he can't have a knight helm), since due to a bug, the Zombie King will grant Knight Helm even to Hypnotized Zombies (Technically because they are still zombies).

When the first huge wave comes, three Zombie Kings will immediately appear at once. A Kernel-pult should stun them, so you can try planting as many as you can before they appear. Kill it quickly with Fume-shrooms and plant Pea-nuts to protect your plants from the Knight Zombies. However, save the Plant Foods, only use them when the zombies cannot be killed.

These, along with Jester Zombies, Knight Zombies, Wizard Zombies, and Dark Ages Gargantuars are very dangerous if all of them appear in one level, especially that this zombie does not move, which ensures that fast and stronger zombies such as Jester Zombie and Dark Ages Gargantuar absorb most of your attacks, similar to Wizard Zombie. If you see these five types of dangerous zombies in large numbers in one level, all of these zombies can cause massive havoc on your lawn, emptying everything and causing you to lose the game. To prevent massive havoc from happening, you must have a Cherry Bomb, and some very heavy hitting plants, like Winter Melons, as well as, area of effect plants such as Laser Bean. In later levels, boosts such as Iceberg Lettuce are highly recommended.

The Zombie King is one of the greatest threats in its appearances in Piñata Party. Fortunately, it will only grant knight helmets to Peasant Zombies, and commonly there will not be any Peasant Zombies with it, only making it a shield for zombies behind it. 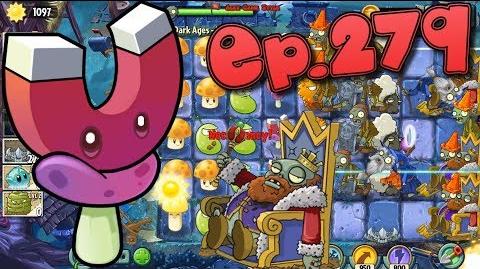