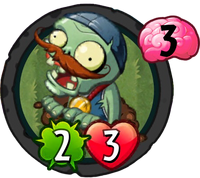 When revealed on Heights: This moves to the Water and gets +1

.
He used to be afraid of heights... and water. True story.
Zombie High Diver is an event zombie card in Plants vs. Zombies Heroes and a member of the

. He has the Gravestone trait, and his ability gives him +1

He was introduced in update 1.14.13, along with Garlic, Health-Nut, High-Voltage Currant, Banana Split, Sun-Shroom, Secret Agent, Gargantuar-Throwing Imp, and Imposter.

He is based on a high diver, a person who participates in high diving.

His description is purposefully ironic, because a high diver is a person who jumps off of a board high in the air and lands in a pool full of water.

He used to be afraid of heights... and water. True story.

Zombie High Diver has mediocre stats for his cost. But if you play him on the heights, he will move to the aquatic lane, and in turn, be able to help take out almost any Amphibious plant there and survive (not taking plants with Team-Up into account). Since he is in the sports tribe, Neptuna can use this in a sports deck with Team Mascot, who can constantly boost him, or Zombie Coach, who can protect him for a turn. And being a Gravestone zombie, you can use this zombie while Headstone Carver is on the field to boost him even more when he moves to the aquatic lane.

However, the problem for Zombie High Diver is that not only is he viable when played on only one lane, you need to keep two lanes, the heights lane and the aquatic lane, empty just to increase his stats to slightly above-average, not to mention that one lane will be left unguarded after that. Barring tribe synergy, Space Cowboy played directly on the aquatic lane would be a superior alternative to him, as even without his ability, he still boasts slightly higher health and the Strikethrough trait.

If you see a gravestone being played on the heights on turn 3 and you are certain that it contains Zombie High Diver, try moving an Amphibious zombie onto the aquatic lane with Whipvine or Banana Peel so that he cannot activate his ability. Or, you can play Grave Buster to end him once and for all. As a preemptive measure, you can move another zombie onto the heights lane so that Zombie High Diver cannot activate his ability, thus discouraging your opponent from playing him.

If Zombie High Diver manages to activate his ability, you can play a powerful plant on the heights lane, as the heights lane will be unprotected after he moves onto the aquatic lane.

To remove him, Whack-a-Zombie can do the job, regardless of whether he has activated his ability. If his strength reaches 4, you can play Shamrocket instead. As a last resort, play a powerful Amphibious plant like Marine Bean or Guacodile, although the latter is too valuable to waste on a Zombie High Diver.