Zombie Hamsterballs are items in Plants vs. Zombies 2 that were introduced in the 6.9.1 update. It can come with nearly any of the existing zombies inside it, including Gargantuars, and significantly increases the speed of the zombie it contains, but breaks after absorbing a limited amount of shots.

It destroys any plant instantly by rolling into them, similar to Barrel Roller Zombie's barrel. It moves slower upon destroying a plant. It is only available in Arena and certain Penny's Pursuit levels and will appear during "HAMSTER BRAWL!" ambushes. Any zombie inside of a Zombie Hamsterball is unable to use any of their special abilities.

Alongside these abilities, Zombie Hamsterballs can appear with Plant Family icons on them, which will show what plants the Hamsterball is weak or strong against.

They are based on the real life object, known as the hamster ball, a type of exercise equipment for hamsters and other small rodents. However, these balls are resized for zombies to use.

A Spikerock can instantly destroy it, but it will degrade it once. This, however, will not work if the Zombie Hamsterball approaches the Spikerock using a slider tile. Spikeweeds can also be used for their cheaper price and just as fast recharge, although they will only take one roll. The most effective way to counter the Zombie Hamsterball is to use the Spear-mint, which creates five Spikerocks, therefore quickly nullifying the threat.

If using Spikerock is not possible due to zombies like Troglobites, then Squash (lv 3+) can also be very effective due to the Zombie Hamsterball's large hitbox, making it take damage from all three smashes, while not being able to move forwards while being squashed.

Bombard-mint is also a good choice to defeat it. Usually 2 out of 3 explosions will hit the Zombie Hamsterball, with each dealing great amounts of damage. This means that it will be likely to pop open. An Explode-O-Nut, Explode-o-Vine or Puffball once planted can fully break it with one hit.

If bounced slightly into the air by certain plants, the Blover will be able to instantly destroy it, destroying both the Zombie Hamsterball and the zombie within.

Players should also pay attention to the icons that appear on the Zombie Hamsterballs, as that helps show how to defeat them quickly. 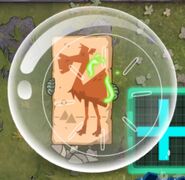 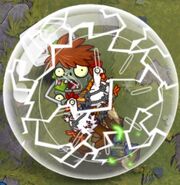 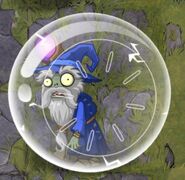 Wizard Zombie in a Zombie Hamsterball 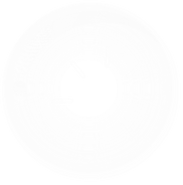