For other uses, see Grave.

Versus Mode
Only appears in Versus Mode
The Zombie Gravestone is an environment modifier in Plants vs. Zombies, exclusive to Versus Mode in the Xbox 360 and Nintendo DS versions of the game. The Gravestone acts as both a wall and a brain producer for the zombie side. When made, a Gravestone will rise up from underground and will start producing brains for the zombies at about the same rate a sun-producing plant produces sun. There is no Suburban Almanac entry for it and it will become unavailable to summon when Sudden Death starts.

You really want to build these up as fast as you can, as not only do they give you brains to make zombies, they make perfect walls to protect your Target Zombies early in the game. Because of the fact you can also create zombies on a grave, you don't have to worry about where you place them, and instead should try to get three full columns of them. In the beginning of a Versus game, you really want to focus on just building up your graves and sending a few minor zombies like Zombies and Conehead Zombies to not only block and protect them, but to put a little pressure on your opponent.

You must be careful because your opponent can plant Grave Busters on your Gravestones and destroy them, so keep that in mind.

Trash Can Zombies are good for protecting the Zombie Gravestones to minimize the overall damage caused to them as well as for adding an extra layer of protection to your side of the lawn.

Grave Buster can be incredibly useful in dispatching the graves. But be careful, as you should plant a Grave Buster where and when it is far away from zombies, or else it may be eaten up. Grave Busters are effective if you plant them on undamaged Gravestones, since they completely destroy them. Grave Buster also takes a long time to recharge. If you can't use the Grave Buster on the Zombie Gravestones, just pile up raw damage from your other plants to destroy them. 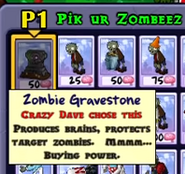 A lot of Zombie Gravestones

Zombie Gravestone about to produce a brain

Zombie Gravestone's last degrade
Add a photo to this gallery

Retrieved from "https://plantsvszombies.fandom.com/wiki/Zombie_Gravestone?oldid=2262975"
Community content is available under CC-BY-SA unless otherwise noted.