Uses machine gun to attack plants and the home ship.

In order to become a good Zombie Fighter, during flight school, he studied 97 flight courses, passed 81 different exams, experienced flight simulations 101 times... He and others always mention their superb flying skills, but those that have sat in his plane seem reluctant to mention this subject again.

Zombie Fighter (战斗机僵尸; pinyin: zhàndòujī jiāngshī) is the sixth zombie encountered in Sky City. Once he enters the lawn, he will shoot Bullets rapidly at the player's ship or a plant on his way. However, unlike any other zombies in Sky City, when reaching the ship, he will fly back to the left side of the lawn, change his lane and continue to attack.

If lobbed-shot plants, Bowling Bulb, or Monkeyfruit deal enough damage to him, the Imp will fall off the plane and the plane will move at a faster speed. It will no longer shoot bullets and will deal heavy damage to plants when it makes contact with them. If it reaches the ship, the unmanned plane will self-destruct, dealing huge damage to the ship.

Zombie Fighter can be difficult to deal with if the player encounter it at the start. He is very durable but slow, and also shoots bullets against the ship and the plants. When he reaches the edge of the player's castle, he will fly off-screen and change lanes. Therefore, it is advised to use powerful offensive plants to kill him quickly before he goes further and use Spinnapples to deflect his bullets before he slices it with its propellers, or use other aerial plants to temporarily delay them. Later on, they will appear in massive numbers and will blend with other zombies, making things more difficult. It is recommended to use instants such as Level 2 Jalapenos and Saucer Squashes to overcome the problem.

These zombies will act as bosses in the Brain Buster Air Raid and have extremely high health. In addition to this, they will unleash massive amount of bullets that are difficult to dodge and travel very fast. They will have three (or only two in the last stage), which is shooting red bullets that will act like fireworks (These are usually unavoidable but it doesn't deal much damage each shot), shooting yellow bullets in four directions that will go in a half-circle patter (These are slow and easy to dodge but deal huge damage) and shooting homing blue thistles (These are in a medium speed and deal medium damage). In later stages, two of them will appear and will clog the screen with bullets, so reflexes are required to dodge them. Try to kill 1 of them first, as it'll be much more easier fighting with only 1 of them. If the player loses, they can revive themselves with 10 gems. Two will also appear as mid-bosses in the third stage, and the same strategies apply if the player does not want to spend countless amount of gems for continues. 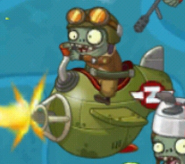 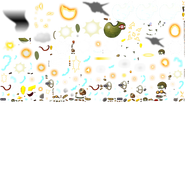 3 Zombie Fighters in the seed selection screen (Endless Challenge only) 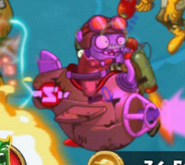 A hypnotized Zombie Fighter
Add a photo to this gallery
Retrieved from "https://plantsvszombies.fandom.com/wiki/Zombie_Fighter?oldid=2361551"
Community content is available under CC-BY-SA unless otherwise noted.