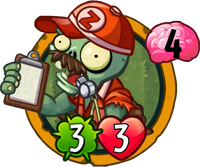 For the similar zombie in Plants vs. Zombies Adventures, see Coach Zombie.

When played: All Sports Zombies can't be hurt this turn.
There's no "i" in Zombee!
Zombie Coach is a premium rare zombie card in Plants vs. Zombies Heroes and a member of the

. He does not have any traits, and his ability shields all sports zombies for the turn he is played.

He is based on the zombie in Plants vs. Zombies Adventures with a similar name and appearance.

His description is a reference to the phrase, "There is no "i" in team!", but with the word "zombie" intentionally misspelled due to the word actually containing the letter "i."

While having poor stats for his cost, his ability is especially useful if you've had enough sports zombies on the field.

A good combo with this zombie is Team Mascot as they both provide some type of boost to sports zombies. Zombie Coach will protect the sports zombies from damage for a turn, while Team Mascot will boost them at the start of the next turn.

Rustbolt can use Teleport on Zombie Coach during the Zombie Tricks phase, which will protect all sports zombies and surprise his opponent (Beware that the opponent might attempt to destroy the sports zombies in the plants play phase, though). He can also use this with more zombies such as Pool Shark, Mountain Climber, and especially Brain Vendor, which he can use to easily swarm the field due to his ability to make him a free zombie. Additionally, Neptuna can use In-Crypted on the Zombie Coach to reactivate his ability at the start of the Zombie Tricks phase on the next turn, though she must put him at the very right of the field, as his ability does not affect hidden gravestone zombies such as Rodeo Gargantuar and Sumo Wrestler. Firefighter can also be used to Bounce him, though it will leave a lane open. It is not recommended to use the Mixed-Up Gravedigger, however.

Using this in tandem with Planetary Gladiator will result in total invulnerability for the turn.

Shielded Zombies are not immune to any destroy effects, stat-degrading, and bouncing cards. Strikethrough effects can likewise damage the zombie hero directly. Just remember not to Bounce the coach, or else his ability can be re-activated. Unfortunately, Captain Combustible does not have access to hard removal cards so he must maintain tempo in order to prevent too many sports zombies from getting on the field.