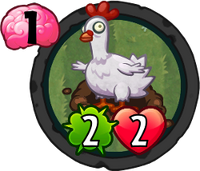 This moves to a random lane when a plant is played here.
Question: Which came first, the Chicken or the egg? Answer: The Zombie!
Zombie Chicken is a premium uncommon zombie card in Plants vs. Zombies Heroes and a member of the

. It does not have any traits, and its ability moves it onto another random lane every time a plant is played on its lane.

Question: Which came first, the Chicken or the egg? Answer: The Zombie!

Using Vitamin Z is useful for Zombie Chicken, as you may be able to do a big chunk of damage to your opponent.

Since it is a pet zombie, you can also save it for later to combine with Cat Lady or Zookeeper and boost their strength. Only Brain Freeze can use this combo normally.

This is a difficult zombie to deal with, as it moves whenever a plant is played in its lane, especially in the early game. Using plants with Splash Damage like Snapdragon have a higher chance to hit it, even after it has moved. Additionally, filling the field with plants can help, as it has a lower chance to end up on an empty lane.

Using tricks can also help if you cannot find a way to hit it directly.

You can also move Zombie Chicken back to a lane of your choice by playing Whipvine, Hot Date, or Sweet Potato. However, if you are playing Sweet Potato, be sure to have a plant behind it so the plant is able to destroy Zombie Chicken.

You can also use its ability to your advantage with

Anti-Hero plants, as Zombie Chicken will move away from the plant, allowing you to severely hurt your opponent.