Plants vs. Zombies Wiki
Register
Don't have an account?
Sign In
Advertisement
in: Zombies, ZomBotany zombies, Non-almanac zombies,
and 4 more

ZomBotany zombies are special zombies in Plants vs. Zombies. They have a normal zombie's body, but they have the heads of plants. In the mini-game ZomBotany, Wall-nut Zombies and Peashooter Zombies are featured, which have higher health and shoot peas at the player's plants, respectively. ZomBotany 2 has the same zombies from the former mini-game, along with Squash Zombies, Gatling Pea Zombies, Tall-nut Zombies, and Jalapeno Zombies. Peashooter Zombie, Gatling Pea Zombie, and Squash Zombie take the same amount of damage per shot as a normal zombie. Other than Squash Zombie, they all move at the speed of a normal zombie.

These are one of the more dangerous types of ZomBotany Zombies because it can destroy all of your plants in a row which weakens your defense like the Zomboss fireball from Plants vs. Zombies and wastes a lot of sun. The big difference is that the attack destroys everything simultaneously and does not affect the lawn mowers/pool cleaners.

The three best ways to counter this zombie are: 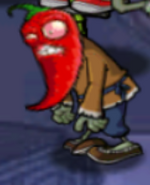 Every zombotany zombie except for tall nut zombie in PvZ:GWE