ZomBotany is the first mini-game, available as soon as the mode is unlocked. It features several Peashooter Zombies and Wall-nut Zombies, which have the same abilities as the corresponding plants. Defensive plants such as Wall-nuts and Tall-nuts are vital here, considering the Peashooter Zombie's ability to damage plants from a far. 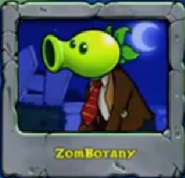 DS Icon
Add a photo to this gallery

A strategy for those who have not completed the game yet.
Add a photo to this gallery