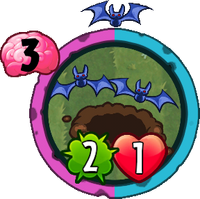 When this hurts a Plant, draw a card.
Like Chihuahuas with wings... and fangs... and a taste for Plants.
Zom-Bats are a token zombie card in Plants vs. Zombies Heroes and a member of the

Beastly classes. They can be made by Witch's Familiar, Immorticia's signature superpower. They cost 3

. They have the Amphibious trait, and their ability draws a card every time they do damage to a plant.

They are based on bats, mammals of the order Chiroptera with their forelimbs adapted as wings.

Their name is a portmanteau of "zombie," referring to the side they are on, and "bats," the real-life animals they are based on.

Like Chihuahuas with wings... and fangs... and a taste for Plants.

Zom-Bats can essentially be seen as an early-game Kite Flyer, trading survivability with a little more strength. Any basic strategies about drawing cards with Kite Flyer should apply to Zom-Bats too, although they will not be able to survive one attack due to their low health. You could play them in front of a plant with no strength like Torchwood or Wall-Nut, as Zom-Bats will be able to land a free strike on that plant without being destroyed, but this is only a temporary solution due to the majority of those plants having Team-Up; boosting this zombie should be the primary tactic.

Since they are a pet zombie, they can be used with Cat Lady and Zookeeper for some synergy, and because Immorticia's superpower is a pet trick as well as Zom-Bats themselves, these zombies can activate their ability twice.

Zom-Bats are no threat by themselves, but their ability proves them a bit annoying, since your opponent will draw a card if Zom-Bats faces combat against a plant. Do not play any plant that can't fight back to block this zombie (with the exceptions of Potato Mine, Primal Potato Mine, and Hothead), as they will just give your opponent free cards. Also, unless Zom-Bats are boosted, refrain from playing an overly strong one as well, as it will just be a perfect target for a potential Rocket Science.

If you don't want Zom-Bats to give your opponent a card, remove them with a simple damaging card like Banana Bomb or Berry Blast, or Bounce them. While you could just take those hits yourself and stall since Zom-Bats' ability does not activate if they hurt you, things could go south quickly if you don't keep track of your health or if your opponent decides to boost Zom-Bats.

AI opponents will usually play this immediately if they have it, even if you don't play any plants, which effectively wastes it, as you can usually easily destroy it in the next turn. 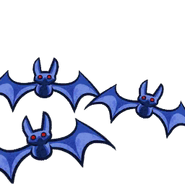 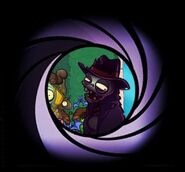 Secret Agent being played on Zom-Bats

Healthy Treat being played on Zom-Bats

Devour being played on Zom-Bats 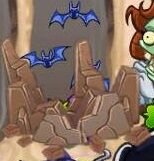 Rock Wall being played on Zom-Bats

Iceberg Lettuce being played on Zom-Bats

Lurch for Lunch being played on Zom-Bats