Zen Sensei is a boss zombie in Garden Ops in Plants vs. Zombies: Garden Warfare 2 and Plants vs. Zombies: Battle for Neighborville. He is small, quick and is able to make three clones of himself, making him a  much bigger problem. He can punch plants three times in a row at close range, with the third punch slowing down the plant, making it harder to put distance between the Zen Sensei and you. At long range, he can charge up a powerful yellow and purple zen energy ball and send it flying at the player, doing impact and splash damage.

When the boss slots land on three Zen Sensei icons, a Super Karate Wave will occur. During the wave, Karate Zombies replace all regular zombies. There will be one Champion Karate Zombie.

The Zen Sensei is one of the easier bosses to fight, provided you keep your distance from him. His only ranged attack is one that takes a while to charge, so you have time to avoid it. Try not to use any rooted abilities at close range, because his Dash Punch can knock you out of them. When he creates clones, it is advised to take out the clones first, since they have little health, and will cause a lot of trouble for you if you don't. Also, note that if you jump up onto a slightly higher place, you can hit him, but he can't hit and stun you with his punch combo, only fire Energy Balls at you, which can typically be avoided. This trick can help you out a lot in taking Zen Sensei out. Note that while Zen Sensei is programmed to use his high jump ability to reach enemies on rooftops, his AI usually cannot usually properly land on his intended surface, so he will just jump up in the air and land in a similar spot over and over again.

Zen Sensei fighting with his Clones 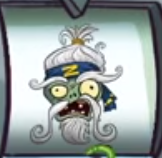 Zen Sensei in the boss slots 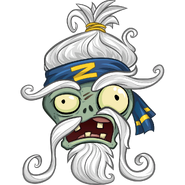 Zen Sensei up close
Add a photo to this gallery

Retrieved from "https://plantsvszombies.fandom.com/wiki/Zen_Sensei?oldid=2194963"
Community content is available under CC-BY-SA unless otherwise noted.