The Zen Garden is a virtual garden where you keep Plants that you have collected, usually obtained from Presents. They are the same Plants you use in the game. It is an alternative, non-competitive environment obtained by completing the Adventure Mode level 5-4. If you really want presents just keep playing or try to get certain numbers of streaks in I, Zombie Endless, Vasebreaker Endless or Survival: Endless. All Zen Garden plants have to be watered, sprayed, fertilized and either bugsprayed or played music to periodically, but nothing negative will happen if you ignore their needs.

The objective of the mode is to acquire Plants, either by random drops in any of the other game environments, or by purchasing them from Crazy Dave. Once they are obtained, the player must care for them by watering them and meeting their other needs until they are fully grown. Once they are at full size, the player must water them every day and make them happy, after which they will begin dropping coins every 30-60 seconds or so for up to a full calendar day. At midnight, they will again require water and bug spray / music (Tip: If you are planning to open the Zen garden at 11:55 PM or so, wait until midnight. This will avoid having to tend to your plants a second time).

There are 32 available spaces for Zen Garden plants in the main Zen Garden, and 8 slots in each of the other two gardens which can be purchased from Crazy Dave for $30,000 each: the Mushroom Garden (for plants that sleep during the day) and the Aquarium Garden, for aquatic plants. Zen Garden plants can be obtained by random drops from killing zombies, or up to three Zen Garden Marigolds can be purchased per real calendar day from Crazy Dave's Twiddydinkies for $2,500. On the iPod, iPad and iPhone versions, you may purchase random plants in Crazy Dave's Twiddydinkies for $7,500 once per day. Bronze sprouts are $15,000, silver are $30,000 and gold are $50,000.

The best way to get Zen Garden plants is to play Survival: Endless, as all plants can be obtained in it and it is the level with the greatest number of zombies.

Another good way to get plants for your Zen Garden (this requires some hacking; see Hacking guide and/or I, Zombie hack for more details) would be to use the I, Zombie Hack with the Imitater, then apply the instant refill and unlimited sun hack, then just spawn as many "Imitaters" as you can, then switch it to any Survival mode level, get out your Cherry Bombs and blast away, enjoy! (This method only works for the GOTY version of the game)

Mushrooms and aquatic plants will not mature past the first stage or allow themselves to be happy unless they are in the Mushroom Garden or Aquarium, respectively, and aquatic plants never need to be watered once they have grown past seedling stage. Although they will not grow unless in the proper environment, they will ask for bug spray or music, and can become happy in any environment if fully grown. Once fully grown and happy, Mushrooms can then be moved to the main Zen Garden where they will remain awake and drop coins at intervals throughout the day (aquatic plants can be moved there as soon as they mature). Mushrooms must be moved back to the Mushroom Garden once a day to be watered and made happy again, after which they will remain awake in the main Zen Garden, Or they can be left in their own garden and will drop coins there after a short while when happy. Other aquatic plants, once fully grown, no longer need to be in the Aquarium Garden to be made happy, and never need to be watered. They, too, can be left in their own garden to drop coins.

The Sea-shroom is not an exception, and will not grow if it is in the mushroom garden, despite it being a mushroom.

Purchased Marigolds start as small flower seedlings, but other dropped plants start as unidentified sprouts. In order to for these plants to begin dropping coins, they must be cared for until they mature. As each plant grows, an icon will appear next to the plant indicating what it needs: water, fertilizer, bug spray or music. When you get the Zen Garden, you begin with a single-shot watering can that can be used over and over again - each use watering a single plant. The Golden Watering Can can be purchased for $10,000 and will water any plants in its area (shown by water circling it) and you can typically water up to four plants at a time. Other items purchased at the store include Fertilizer ($750 for 5 uses), the Phonograph ($15,000 for unlimited use), and Bug Spray ($1,000 for 5 uses).

The Zen Garden will not produce or collect coins unless the Plants vs. Zombies window is open to the Zen Garden. This means the player may open another window and run other applications while continuing to collect coins from the Zen Garden (the game must not be in full screen, and if the game is minimized, the Zen Garden won't drop or collect coins for the PC version). However, timers, like Stinky the Snail's sleep timer, will continue to run. At midnight, by your computer's clock, the timer resets, and your plants will need to be watered or made happy once more. In the iOS versions, the Zen Garden WILL produce and collect coins when you aren't in the garden, even if the app isn't even open!

Stinky the Snail can be purchased from Crazy Dave for $3000. At first, he will appear asleep at the bottom of the Zen Garden, if you wake him up by clicking on him, he will begin to (slowly) collect coins dropped by your plants. After a few minutes, he will become sleepy and fall asleep at the bottom of the screen again. Stinky does have a secret weakness for Chocolate, and if you feed him a piece, he will become extremely hyper and continue to collect coins at a high speed (for a snail) for about an hour. However, he cannot be fed more than one piece of Chocolate at a time. Also, giving Stinky Chocolate wakes him up, although this may be due to the fact that giving him chocolate requires clicking on him. Strangely, on the PlayStation 3 version, pressing the triangle feeds him the Chocolate without waking him up.

Chocolate can also be used to increase the rate at which a plant drops coins and allows them to drop more before they stop dropping coins (if they are not picked up). As stated previously, plants drop more often right when they become happy; as a result, Chocolate is best given at that time, when they give the maximum increase.

The Zen Garden can be a relaxing low-pressure click-for-rewards game, or can simply be left running as a musical and visual treat. Additionally, feeding Stinky chocolate will allow you to continue collecting coins, even when you aren't at the computer, making the Zen Garden a popular way to earn money.

You can also add your own!

A Zen Garden, with a Squash in the Wheelbarrow.

The Zen Garden for iPod Touch/iPhone 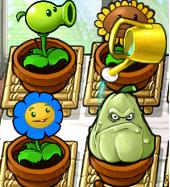 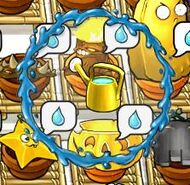 A lots of watering cans!

here's my ds zen garden (with 1 sprout going to uncover)

Procastinaorman's Zen Garden(iPad Screenshot. Doesn't include Mushroom or Aquatic Garden)
Add a photo to this gallery