Memory Lane
The driver of this zcorpion often behaves quite differently even when he was small. He lacks understanding of humour and sarcasm, and prefers showing off his high IQ. Though the zcorpion he modified can launch multiple vases at once, not many zombies are willing to enter the vases due to how bad he is at getting along with others. Because of this, he could only stuff a lot chickens into the vases as replacement.
Zcorpion Zombie is a zombie that can appear in Epic Quests, Arena, and Penny's Pursuit in Plants vs. Zombies 2. It is a machine controlled by a Roman Imp, which is used to launch vases at defenses, which releases Roman Zombies, Roman Coneheads, Roman Bucketheads, Healer Zombies, and Roman Shield Zombie, similar to how Imp Porter uses a tent to release Adventurer Zombies and their variants. Any thrown vase can also instant-kill any non-defensive plant on impact.

After launching five vases, it will self-destruct.

In the Chinese version, it has an Elite variant that can occasionally launch 10 vases at once. Vases launched by it have a chance to release a Zombie Chicken.

Zcorpion Zombie is based on the scorpio, a type of Roman torsion siege engine and field artillery piece, with a "Z" in its name to reference it being a zombie.

A ballista from Ancient Rome, the Zcorpion Zombie launches an exploding vase at the nearest plant in its lane.

Surprise! That exploding vase has a zombie in it! Isn't that surprising?

Threepeaters combined with boosted Torchwoods along with Power Lilies and Tile Turnips should be powerful enough to neutralize the threat. If they appear in the Zomboss battles, make sure Zomboss' Zombot isn't blocking it or the vases will continue to launch at it. A max-level Bombard-mint will defeat the zombie easily, too, and a Laser Bean (with or without Plant Food) will go directly past the Zombot and kill the Zcorpion Zombie in the process. Lightning Reed is also very effective too. Try putting Spikerocks in front of Zcorpion Zombies since it will then continuously throw vases at the plant and it will not be damaged. This will make the zombie useless against destroying plants with it vases. Try planting vine plants to the closest plant that is near the zombie, when the vase is launched at the plant it will cause the vine to be destroyed instead of the plant. However, this strategy is not as effective in Spicy or Extra Hot levels, as the increases eating speed of the zombies will render this strategy largely ineffective.

If the player cannot handle the Zcorpion Zombie, simply use the Zom-B-Gone Perk to downgrade this zombie to an Imp Cannon. This can be useful in Spicy and Extra Hot Penny's Pursuit levels, since zombies in these increased difficulties have too much health to be defeated and Zcorpion Zombies are dangerous when combined with too many dangerous zombies with higher health. 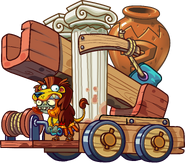 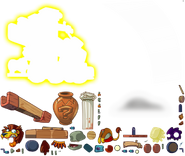 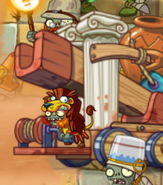 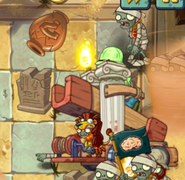 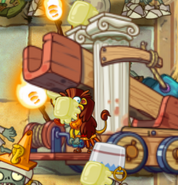 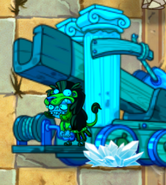 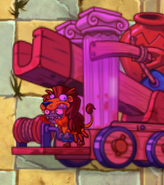 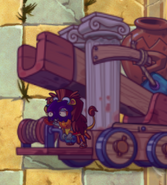 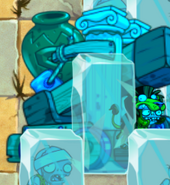 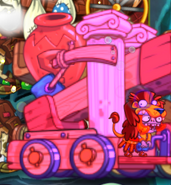 Animation of ZCorpion Zombie preparing to launch a vase

Animation of ZCorpion Zombie launching a vase (note: The second launch is different from the first) 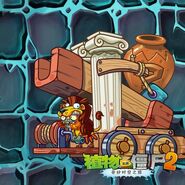 Zcorpion Zombie on the official Plants vs. Zombies Tmall store