None
"Some say that Zombies aren't easily shocked. I beg to differ."
Zapricot is a basic common plant card in Plants vs. Zombies Heroes and a member of the

It is based on an apricot, a fruit in the genus Prunus.

Its name is a portmanteau of "zap," referring to the fact that it attacks with electricity, and "apricot," the real-life plant it is based on.

Its description makes a pun about the word "shocked," as it means both "surprised" and "zapped with electricity."

"Some say that Zombies aren't easily shocked. I beg to differ."

Due to its high base strength, Zapricot can serve as an early-game glass cannon to destroy certain zombies like Drum Major, Mountain Climber, Smelly Zombie, Foot Soldier Zombie, etc.

Compared to Fire Peashooter, except Zapricot has 1 more strength, costs 1 more sun, and is in the Kabloom class. However, unlike Fire Peashooter, it completely lacks tribe synergy. Thus, Fire Peashooter is a better choice if you are planning to run a pea deck as Captain Combustible.

Zapricot hits very hard, destroying or badly damaging any zombie that can come on turn 3. Fortunately though, it does not have much health. You can sacrifice a weak zombie or use a cheap trick like Bungee Plumber to destroy it easily. You could play Rocket Science on it, but this is not recommended unless it threatens you a lot as there will most likely be better plants to play it on. 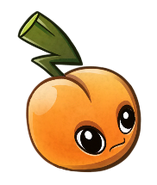 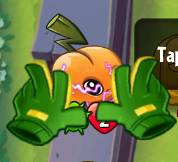 Gardening Gloves being played on Zapricot

Storm Front being played on Zapricot