Special
TBA
The Z7 Mech is a playable zombie Z-Mech variant in Plants vs. Zombies: Garden Warfare 2 as an alternate form for the Z7 Imp. It is designed to be based on Grass Effect, a Garden Warfare spoof of Mass Effect.

Very similar to the default Z-Mech's primary weapon, the Robo Laser, the Z-8 Avenger is a fully automatic weapon. Holding the fire button down sprays lasers in a small cone in the direction the Z7-Mech is facing.

When you call in your Z7 Mech, don't fight large groups of plants. Instead strike a lone plant, as this will mitigate the slow firing speed of his weapon- groups of plants will easily overwhelm you. You can combo your biotic pull with your Zomni-Blade to quickly start and finish fights against singular plant targets.

The Z7 Imp's Mech is very similar to the Base Imp's Mech with the difference being it's ability loadout. Any Citron can make quick work of this Mech when tag teaming with another Citron or Rose. Ice variants can be useful to tag team with because they can freeze the Mech. Snipers can also be effective against this Mech, just beware of its biotic pull, because you really don't want to one on one this Mech at close range. 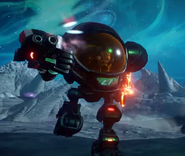 A close up of Z7 Mech 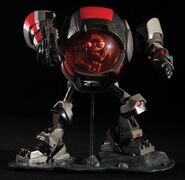 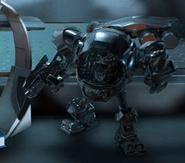