Deploys a set of summoning and teleportation technologies to harass, damage and otherwise imperil plants on the board.

Missile can target and destroy a random plant, and leaves a scorched tile

(Plant Food only) (Jetpack Zombies are forced to eat their shields)

Arena - Strawburst's tournament
Z-Mech is taking time out from his PvZ Heroes and PvZ Garden Warfare duties to bring his unique brand of destruction to Plants vs. Zombies 2. Don't worry, though; he's cleared it with his manager.
Z-Mech is a zombie that can only be found in Arena and Penny's Pursuit in Plants vs. Zombies 2. He will advance to the 7th column while in an invulnerable force field, and, when spawned, will crush any plant that he is on with his mecha suit. After reaching the 7th column, he will summon Jetpack Zombies, Disco Jetpack Zombies, and/or Blastronaut Zombies around him, and will also summon several Bug Bot Imps on random tiles, and will target a random plant with a missile similar to that used by Dr. Zomboss. He will also teleport zombies. After a while, he will leave the lawn.

It also cannot be slowed or stunned by any plant except E.M.Peach. He can also remove gum from gummed zombies when teleporting them.

Deploys a set of summoning and teleportation technologies to harass, damage and otherwise imperil plants on the board.

Z-Mech is taking time out from his PvZ Heroes and PvZ Garden Warfare duties to bring his unique brand of destruction to Plants vs. Zombies 2. Don't worry, though; he's cleared it with his manager.

Z-Mech is armed with 4 special attacks, sure to leave a dent in your defenses:

The Z-Mech absorbs 14000 damage and can summon Bug Bot Imps (Spider Rain), launch missiles at plants which creates charred tiles (Orbital Strike), and teleport zombies closer to the house. In its final stage, which can be engaged through surviving 85 seconds with it on screen, it will summon Jetpack Zombies, Disco Jetpack Zombies, and Blastronaut Zombies.

This zombie can a problematic threat during certain Arena tournaments and Penny's Pursuit levels.

Instant-kills such as Primal Potato Mine, Squash, Grapeshot, or Bombard-mint can be considered a good option to help deal heavy damage against the Z-Mech. However, you should only do so after his deployment animation has ended, as he can't take damage before that. Be careful that the Z-Mech has a number of attacks that can be threatening to your lawn such as summoning Bug Bot Imps, teleporting zombies closer to the house, or firing missiles to destroy your plants. Once it reaches its final stage, it can summon Disco Jetpack Zombies and Blastronaut Zombies to make the battle against Z-Mech more difficult. Remember that Blover and Hurrikale can only blow away Disco Jetpack Zombies and Blastronaut Zombies, not Z-Mech itself.

Depending on your Arena league, defeating Z-Mech may or may not be possible regardless of your plant's levels. For lower leagues, higher-level instant-kills can be considered a viable option to defeat Z-Mech, but for higher leagues, Z-Mech has too much health to be able to defeated.

As Z-Mech has an extremely high amount of health, defeating one gives a lot of points in Arena.

Avoid using Gumnut on zombies to stall while in the presence of Z-Mech, as he can easily remove the gum by teleporting the gummed zombie 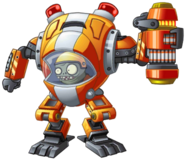 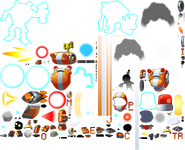 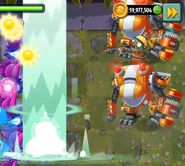 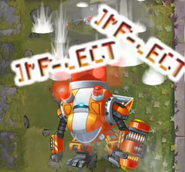 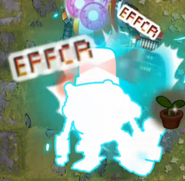 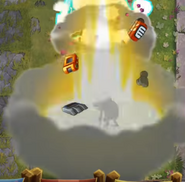