A Super Yeti Wave occurs when all three Zomboss slots land on the Yeti Zombie's face. A cutscene will occur, showing him coming out of an ice floe, making an Ice Storm, unearthing an ice cream cocktail and drinking it. Then, the battle will start.

During a Super Yeti wave, Yeti Imps and Arctic Troopers will appear often.

Unlike the Zombie Yeti in Plants vs. Zombies, this Yeti is proven to be a challenge, especially on harder difficulties. The Yeti Zombie's main attack is throwing an icicle at the player. This attack is not strong but inflicts a slowing effect similar to most ice elemental characters, such as Ice Pea. This could lead to some serious problems when dealing with large groups of zombies. When the Yeti Zombie dances, he will call an Icicle Strike similar to the Corn and Cone Strikes. This Icicle Strike hits the player(s) rapidly and slows them down. Occasionally, Yeti Zombie will jump and release a blast of Ice, freezing all plants near him, This makes Chompers and Cacti nearly useless against Him. Like the Gargantuar, they are immune to freezing, but he can be burned, poisoned and gooped.

Besides the Yeti Zombies, Arctic Troopers, Goalie Stars and AC Perrys will back up the Yetis. Stay away from them and kill all Ice variants first. The cutscene ends and the boss fight begins.

The Super Yeti Waves on Easy/Normal/Hard difficulties can be a challenge, but it's definitely the hardest on CRAZY difficulty. Teamwork, Heal Flowers and Sunflowers are a must in order to complete this snowy boss wave.

When a player gets near the Yeti, the player will be knocked back, making him more deadly.

During the Yeti’s elite wave in Plants vs. Zombies: Battle for Neighborville, the Yeti can only take 1 damage. Soon, Yeti imps will appear and the plant players are tasked with vanquishing a set number of Yeti Imps. After the Yeti Imps have been vanquished, an elite Imp, named Ragnorimp, will appear. Upon being vanquished, he will drop Pjölnir, allowing the Yeti to be harmed for 360 damage by the player who wilds it, along with anyone near them, for 30 seconds. After 30 seconds, the cycle resets.

The players only have 10 minutes to defeat the Yeti. Not doing so will result in a game over. 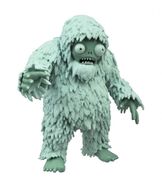 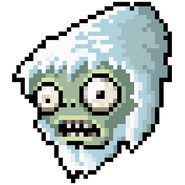 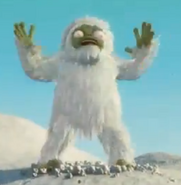 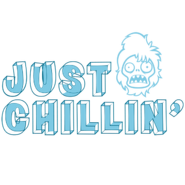 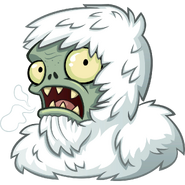 Elite Yeti
Add a photo to this gallery

Retrieved from "https://plantsvszombies.fandom.com/wiki/Yeti_Zombie?oldid=2370743"
Community content is available under CC-BY-SA unless otherwise noted.