Super Rare
The Yeti Chomper hails from the frozen north. A frigid, barren tundra full of maple syrup, game developers, hockey pucks and bagged milk.
Yeti Chomper is the Super Rare ice variant of the Chomper in Plants vs. Zombies: Garden Warfare 2. This character was first revealed in a short clip on November 6, 2015, part of the Character Showcase series.

Yeti Chomper is able to shoot snowballs which slow opponents, and eventually freeze them in place. However, these snowballs have limited range, as they curve downward the farther they are shot, similarly to the Engineer's projectiles.

This variant was the only unlockable Chomper variant available in the beta.

His Arctic Belch can freeze Zombies from a distance, allowing him to close in for an icy snack!

The Yeti Chomper's primary weapon is called the Arctic Belch. It is different from the other Chomper variants as instead of a chomp or a spray, he spits snowballs as a ranged attack. This creates different strategies to use this character correctly and effectively. The snowballs he spits out also arc, similar to the Engineer's weapon. If the player can hit a zombie enough times, it will freeze the zombie, temporarily preventing it from using its weapon or abilities.

Firstly, know the range of your Arctic Belch. Although its range is clearly greater than that of a spray, it is not as good as that of some Scientists such as Marine Biologists or Zoologists. However, the range from which you shoot determines your role in battle. Shooting from maximum range means you will primarily be support, slowing and freezing enemies so your allies can vanquish them. But, however, this definitely makes him the worst Chomper variant out of them all, not including Chomp Thing and Toxic Chomper. At mid and short range, you will be primarily offensive, using your slowing capabilities to close in for the chomp, or simply trying to do damage to weaken the enemy. Never stop shooting at a target, as even the small splash damage counts towards freezing an enemy.

Second, target groups of enemies. Generally, doing this as most other chompers means instant death. However, if you approach correctly, you may be able to get multiple chomps/vanquishes before you go down. Stay at range and use your Arctic Belch to weaken and freeze the group. Close in quickly and set up as many Spikeweeds as possible among the members. This will hold any enemies who happen to unfreeze for a few seconds longer. Proceed to chomp, using your Goop and Burrow to pick up anyone who should get away from the initial feast.

Also, remember that you have no true close ranged attack other than your insta-killing chomp. Beware of Engineers, as they can easily take you down both at range and up close.

Yeti Chomper has the most lobbed primary in the game. With his lobbed projectile, you want to use it behind walls, and shoot over them, which is better in Turf Takeover.

Goop freeze (ice upgrade required for true combo) - goop the opponent and then land three hits on them for it to work. When the opponent is frozen, you can deal out three more hits.

Sticky goop freeze - goop the opponent and then land four hits on them for it to work. When the opponent is frozen you can deal out three more hits (if you have the ice upgrade on, then have only one of the first three shots do splash damage only. This is because splash doesn't freeze zombies as much as direct hits). Without the ice upgrade on, it does more damage.

The first two goop combos can be started with a Spikeweed.

Freeze chomp cannon - after freezing the opponent, you have enough time to use chomp cannon on them. This combo is best used when the opponent is frozen. Just don't use this one on a imp and just hit them with your weapon instead. 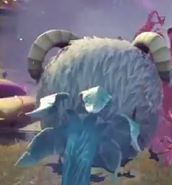 From back, shooting Goop 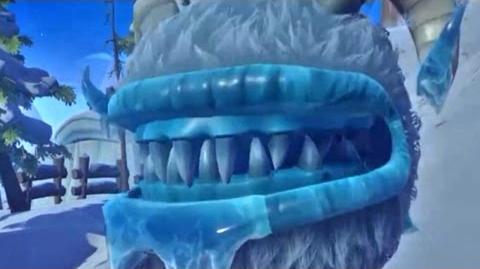 A picture of Yeti Chomper in the Stickerbook 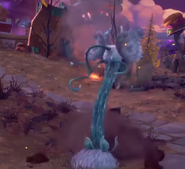 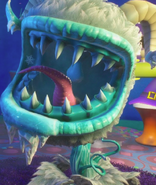