Super Rare
His Super-Driving-Sleeper-Lunge move is trademarked and cannot be used, mentioned, or other wise copied in any way without his express permission.

His Super-Driving-Sleeper-Lunge move is trademarked and cannot be used, mentioned, or other wise copied in any way without his express permission.

His slow-firing but mighty Piledriver will leave all Plant challengers down for the count.

The primary weapon of Wrestling Star is the Piledriver. It has a significantly bigger damage drop-off than the Football Cannon over range and fires 50% slower, but has a higher damage ramp-up at close range, making it devastating at close quarters with proper aim. The max number of shots the Wrestling Star can deal before the weapon overheats is 24.

Arctic bell coolant makes it take a bit longer for his weapon to overheat.

After a pep talk from his personal trainer, he is recovering from overheating much faster these days.

Upgrading from the cheap knock-off supplier, the action figures now do more damage. 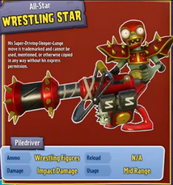 Wrestling Star with Sky Trooper, Landscaper, and Archaeologist in Zomboss Down Pack trailer 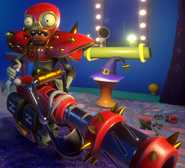 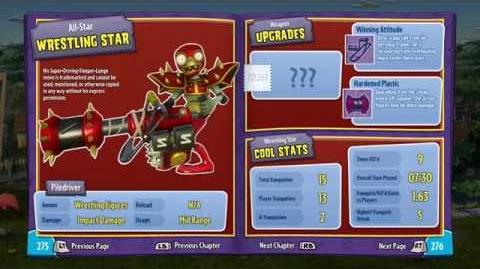