Plants vs. Zombies Wiki
Register
Don't have an account?
Sign In
Advertisement
in: China exclusive, Archived, Zombies,
and 4 more

Invisible, can only be attacked while shone by Plantern and eating plants

Survival
Wraith Zombie (怨灵僵尸; pinyin: yuànlíng jiāngshī) was a zombie in Plants vs. Zombies: Great Wall Edition. She appeared only in Survival mode. She was invisible to all attacks and walked past through all plants. If she was in lighting radius of Plantern, she would lost her ability to walk past plants and could be attacked while eating a plant.

Her appearance is based on Samara from the The Ring franchise. 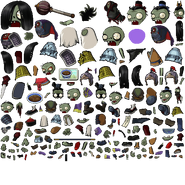