Has increased damage
Woofzy is a Zombie Battle Leader in Plants vs. Zombies: Battle for Neighborville. He resembles an All-Star wearing the "Team Wolfy" costume.

His name is a portmanteau of "woozy," which means "unsteady, dizzy, or dazed," and "woof," referring to how he wears a costume that resembles a wolf.

Woofzy is able to deal a higher than usual damage, indicated by the "up arrow" sprites that appear on him. This means that he's able to quickly deplete your health if you're not careful. This combined with his high health due to him being an All-Star, his ability to deploy a Dummy Shield, and the hordes of All-Stars spawning alongside him means that defeating him can take longer than usual. You can use the Snapdragon, which is able to set him ablaze and deal damage rather quickly with his Flame Blower, as well as being able to use Blazing Trail that's also able to deal significant damage if it hits him, which shouldn't be hard since the AI is rather dumb and he usually won't try to get away from it. Swoop Slam bypasses Dummy Shield if he or the nearby All-Stars deploy one, and is even able to destroy it in one hit, so you don't get interrupted with it. The Coolant upgrade also helps a lot here due to the wave of zombies that spawn, which allows you to fire the Flame Blower for extended periods of time. 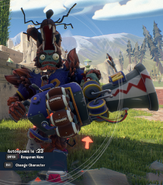