Not to be confused with Wizard Zombie from Plants vs. Zombies 2. 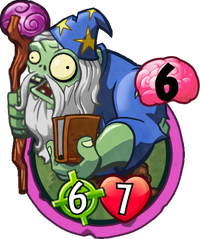 Bullseye.
A wizard did it. An enormous, green, Zombie wizard.
Wizard Gargantuar is a premium rare zombie card in Plants vs. Zombies Heroes and a member of the

. He does not have any traits, and his ability gives all Gargantuar zombies on the field, including him, and any damaging Gargantuar tricks the

Bullseye trait. This ability persists until all Wizard Gargantuars are removed from the field.

He is based on the two zombies in Plants vs. Zombies 2 with similar appearances.

His name is a combination of "wizard," referring to his appearance, and "Gargantuar," the type of zombie he is.

His description is a reference to the trope "A Wizard Did It," which states that any minor continuity errors, nit picks, or similar things that appear in books, shows, or movies (especially fantasy-themed) can be explained with magic.

A wizard did it. An enormous, green, Zombie wizard.

By himself, he is a powerful zombie, as not only does he have above-average stats of 6

, but also a good ability that helps a lot if you are running a Gargantuar deck. Like Smashing Gargantuar, he can allow multiple Gargantuars to have the

Bullseye trait as long as he isn't destroyed.

Immorticia has the best usage of out him, as the Beastly class has the most Gargantuar zombies. For example, she can pair him with Smashing Gargantuar, making an extremely powerful combo, as they allow all Gargantuars on the field to plow through many plants and do a great amount of unblockable damage to your opponent in a single attack. Deep Sea Gargantuar also synergizes well, as he becomes extremely dangerous if your opponent does not have any Amphibious plants or instant-kill cards to counter him.

While not as potent as Immorticia, Rustbolt can play Gargologist to play Wizard Gargantuar on the 4th turn, giving your opponent an unexpected surprise and making it harder for them to counter him. Professor Brainstorm also has minor synergy with him, that being Zombot's Wrath, allowing it to do unblockable damage to his opponent.

Frenzy by playing Smashing Gargantuar or Coffee Zombie, make them do bonus attacks, or play Bouncing, damaging, or instant-kill tricks on plants blocking them.

This zombie is a huge threat, as he has great stats and the

Bullseye trait for 6 brains. Getting rid of him should be a top priority, as he can do 6 damage to you without charging the block meter, and allow other Gargantuars to do that as well. Therefore, prioritize him over other Gargantuars, because Wizard Gargantuar's ability is arguably one of the strongest abilities out of all Gargantuars in the game.

The easiest way is to stall him by playing a plant in front of him in order to avoid taking damage, but this strategy doesn't last long, especially if there is a Smashing Gargantuar in play. You can stall by

Freezing or Bouncing it, and even destroy it with Winter Squash.

You can destroy him by either using powerful plants or playing instant-kill cards such as Squash or Shamrocket. You can also use Doom-Shroom but be wary, as it may also destroy your plants when you play it.

Retrieved from "https://plantsvszombies.fandom.com/wiki/Wizard_Gargantuar?oldid=2248296"
Community content is available under CC-BY-SA unless otherwise noted.