End of turn: Destroy a random Zombie and make a 1

Puff-Shroom with Team-Up there.
Zombies are always trying to build a bridge out of her.
Witch Hazel is an event plant card in Plants vs. Zombies Heroes and a member of the

. She does not have any traits, and her ability makes a Puff-Shroom on a random lane, then instantly destroys the zombie on that lane at the end of every turn, starting from the turn she is played. This ability activates even if the lane is occupied by two plants or on an aquatic lane, and the Puff-Shroom will either be made on another random lane or not be made at all.

She was introduced in update 1.18.13 for the Lawn of Doom Weekly Event, along with Transfiguration, Go-Nuts, Haunted Pumpking, Ketchup Mechanic, Fraidy Cat, Sneezing Zombie, Exploding Fruitcake, Unexpected Gifts, and Frankentuar.

Her ability is a reference to how she "transforms" zombies into Puff-shrooms (technically destroying them) in Plants vs Zombies 2.

Her description is a reference to the movie Monty Python and the Holy Grail, where a group of villagers are trying to figure out if a woman is a witch. During the conversation, a villager suggests to build a bridge out of the woman, to see if she is made of wood and is, therefore, a witch.

Zombies are always trying to build a bridge out of her.

Despite her stats being weak for her cost, she can destroy a random zombie regardless of health and make a Puff-Shroom played in the same lane that zombie is destroyed. Keep in mind that this plant is clearly luck-based as she can devastatingly get rid of either a stronger zombie or a weaker one on the field. You will also want to take note that if she manages to destroy a zombie in the water, a Puff-Shroom will not be made there as Puff-Shroom does not have the Amphibious trait. If Go-Nuts are on the field, all Team-Up plants will get +1

every turn as long as Witch Hazel has zombies to destroy.

If you want Witch Hazel to target the zombie that you want it to destroy, simply try to destroy all other zombies to improve her chances. Overall, she can be a useful plant if used correctly.

Each hero has their own uses with Witch Hazel:

While her stats are weak for 4

, her ability can destroy your stronger zombies while making a 1

Puff-Shroom with Team-Up there. Her ability also bypasses the

Untrickable trait, so using Parasol Zombie won't protect them from Witch Hazel either. But luckily, her ability is completely luck-based, so filling the field with weak zombies can increase the chances of Witch Hazel not targeting strong zombies you have on the board.

To take care of her easily, Rolling Stone, Weed Spray, or Zombot's Wrath can easily destroy her.

End of turn abilities do not count as attacks, so using

Freeze against her will not prevent her from transforming zombies, and she won't un-freeze after doing so. 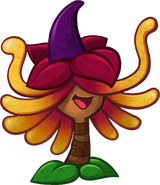 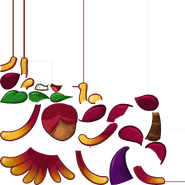 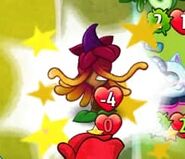 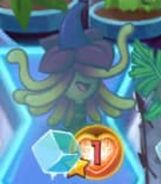 Witch Hazel on the advertisement for the Lawn of Doom Bundle 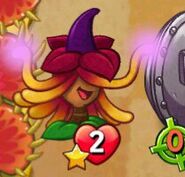 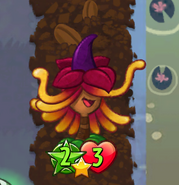 Witch Hazel with a star icon on her strength

Witch Hazel's card before Update 1.22.16
Add a photo to this gallery

Retrieved from "https://plantsvszombies.fandom.com/wiki/Witch_Hazel_(PvZH)?oldid=2298083"
Community content is available under CC-BY-SA unless otherwise noted.