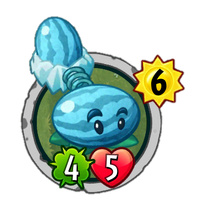 When this hurts a Zombie,

Freeze that Zombie.
Perfect for your winter picnics.
Winter Melon is a premium legendary plant card in Plants vs. Zombies Heroes and a member of the

. He has the Splash Damage 4 trait, and his ability gives all zombies he does damage to the

His description may be a reference to his powers and the fact that watermelons are a popular picnic food.

Perfect for your winter picnics.

Despite his lacking strength, this plant is very powerful if used correctly, due to his Splash Damage trait and the ability to

Freeze 3 zombies at most every time he attacks. He synergizes very well with Snowdrop, as she gains up to +6

per Winter Melon's attack. He also becomes devastating with Winter Squash in play, as this combo will wipe out many zombies at once. Otherwise, think of this plant as a stronger version of Snow Pea that cannot be used with Torchwood or The Podfather.

However, Winter Melon does not have enough strength to destroy most zombies that can be played on the 6th turn, and is most likely going to be destroyed himself. To prevent that, you can make him do a bonus attack when you see a powerful threat or a

Freeze the threat itself with other

Freeze cards such as Iceberg Lettuce and Chilly Pepper. This will result in Winter Melon freezing them over and over again until they get destroyed, or get thawed out from a bonus attack. Citron can use Root Wall or Peel Shield on Winter Melon to make it invincible for one turn while he and Beta-Carrotina can use defensive Team-Up plants such as Wall-Nut and Water Chestnut.

Even with the drawbacks, Winter Melon is a great addition to Freeze decks thanks to his wide effect on the field, and if he is protected well, he can become very devastating.

Winter Melon can be a big threat if you are playing zombies close to each other and with freezing decks. Not only is his ability powerful by itself, he can be even more dangerous with Snowdrop or Winter Squash accompanying him, tipping the scales to your opponent's favor greatly.

Therefore, it is unwise to play zombies where Winter Melon can hit them. Instead, try to destroy Winter Melon by playing tricks and using abilities, as there are many ways to destroy him. First of all, he is naturally vulnerable to Rocket Science and Slammin' Smackdown. You can also play Rolling Stone or Weed Spray, but you should decrease his strength to 2 or less first via cards such as Shrink Ray, Landscaper, Nibble, and Pied Piper. Locust Swarm can destroy him regardless of stats.

As any Hearty Hero, you can negate his attack with Escape through Time, Zombot Battlecruiser 5000, or Zombie Coach for Sports decks as the zombies cannot be damaged and hence, unable to be frozen.