Winter Melons do heavy damage and slow groups of zombies.

Melons damage and freeze nearby enemies on impact

80 damage per shot every 3 seconds

Beat Adventure Mode, $10,000
Winter Melon tries to calm his nerves. He hears zombies approach. Will he make it? Will anyone make it?
Winter Melon is a lobbed-shot plant in Plants vs. Zombies. He is the upgrade of Melon-pult.

Winter Melon attacks by lobbing frozen melon, each having an identical damage profile to those of the Melon-pult, except that they also chill zombies that are in their area of effect (3x3), slowing movement and attack speed by 50%. As with Melon-pult, Winter Melon's attack is only triggered by a zombie appearing in the lane in which he is planted.

His chilling effect will be nullified if his target is also hit by attacks from fire based plants. While his attacks are powerful, he attacks slowly, but this is compensated by the slowing effect and the large splash area, taking out even mechanical enemies with terrifying ease when properly supported.

Winter Melon can be purchased from Crazy Dave's Twiddydinkies for $10,000, once the player has finished Adventure Mode for the first time. After the purchase, the player can use Winter Melon's seed packet to convert any Melon-pult present on the lawn into Winter Melon for another 200 sun. Each melon deals 80 damage per shot to the initial target, and 30 splash damage to all enemies in a 3x1 area.

Winter Melon can be considered as one of the most useful support plants in the game. While his frozen melons are not as powerful as Cob Cannon's missiles nor does he attack as quickly as Gloom-shroom, he compensates with his ability to chill waves of zombies, forcing them to move and act twice as slow. This is significant in Survival Mode and vital in Survival: Endless, as the player will need as much time as possible to neutralize ever increasing numbers of Gargantuars and Football Zombies, as well as to rebuild and repair the constantly crumbling line of defense. However, Winter Melon suffers from having a very low firepower output for his massive price tag of 500 sun, and the fact that Melon-pult is required in order to plant him, making Winter Melon impractical in most normal levels.

Only one column of Winter Melon should be used in any levels, as additional columns will require additional sun and time, while not increasing zombie suppression capability at all. In this case, Melon-Pult seems to be more reasonable to support it's firepower as it has equal damage per shot. Winter Melon is also useful against Newspaper Zombies, Screen Door Zombies, and Ladder Zombies, as his melons can bypass their shields.

The achievement Melon-y Lane is unlocked by planting a Winter Melon in every lane. This can easily be done on any Survival Mode level or Last Stand. It should be kept in mind that they do not all have to be alive at one given time, or in the same column. You can easily get it on Last Stand, as it is not an end-of-level achievement. 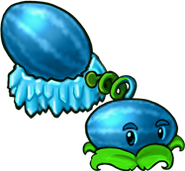 HD Winter Melon without a background

Alamanac entry in the iOS version

Winter Melon seed packet in the iOS and Android versions

A Winter Melon on the lawn

A lot of Winter Melons inside Pumpkins

A sold out Winter Melon seed packet in the PC version 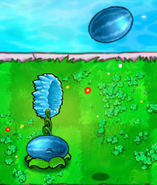 Winter Melon in a Pumpkin

Winter Melon in an Imitater Pumpkin