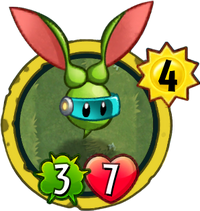 Wing-Nut is a galactic super-rare plant card in Plants vs. Zombies Heroes and a member of the

. It does not have any traits, and its ability prevents all zombies on the field from doing bonus attacks. This ability persists until all Wing-Nuts are removed from the field. Its closest zombie counterpart is Bonus Track Buckethead.

This plant has very good stats for its cost; 3

. What makes this plant even better is that it disables all bonus attacks from zombies, making cards like Lurch for Lunch, Template:PvZHLink, Trickster, and

Frenzy cards either useless or less effective (for

Frenzy zombies, they will not be able to attack again even if they have destroyed a plant).

Stat wise, this plant is already troublesome enough, due to its durability. The fact that it disables bonus attacks means that you will have to most likely sacrifice one of your zombies to destroy it, as you cannot use bonus attacks to destroy it. Keep in mind that its ability can also weaken

If you are a Beastly hero, a cheap way to destroy this plant is to use Squirrel Herder due to its nut tribe. The best way to deal with this plant is to use instant-kill tricks like Locust Swarm and Knockout, or to Bounce it with cards like Pogo Bouncer to negate Wing-Nut's ability. Exploding Fruitcake can also be played to destroy Wing-Nut at once if its health hasn't been boosted, but at the cost of your opponent getting a fruit. You can also play Template:PvZHLink to lower Wing-Nut's strength and then use Rolling Stone or Weed Spray to get rid of it completely. If all else fails, use

Deadly zombies to destroy Wing-Nut or a zombie that can do a lot of damage to it. The best

Deadly zombie for the job is Smelly Zombie, as he can be played on the same turn as Wing-Nut, has the Gravestone trait, and can live one hit from Wing-Nut. However, you will have to play some mind games with your opponent, as they will play Wing-Nut somewhere else if they figure out where Smelly Zombie is.

However, if you are playing as Impfinity, Wing-Nut's ability is essentially powerless as both the Sneaky and Crazy classes lack bonus attack cards. Impfinity also has access to

Deadly zombies and Exploding Fruitcake, allowing him to easily put an end to Wing-Nut itself too. 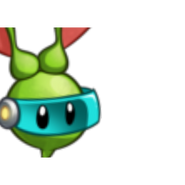 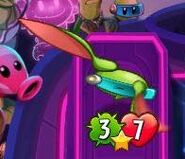 Terrify being played on Wing-Nut

Exploding Fruitcake being played on Wing-Nut 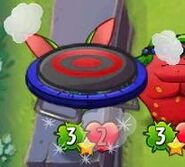 Backyard Bounce being played on Wing-Nut 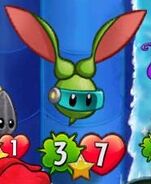 Gigantic Wing-Nut due to a glitch

Retrieved from "https://plantsvszombies.fandom.com/wiki/Wing-Nut?oldid=2182230"
Community content is available under CC-BY-SA unless otherwise noted.