For the playable class, see Wildflower.

3 min.
Half range, half melee, and 100% wild.
Wildflower is a Spawnable plant introduced in Plants vs. Zombies: Battle for Neighborville. It is a ranged variant of the Weed, preferring to attack at a distance rather then up close, dealing damage to zombies by firing projectiles at them.

Wildflowers are the plant equivalent of the TV Head, it deals ranged damage to zombies and can throw an explosive knockback grenade. Once one is spawned, it then has to cool down for 3 minutes.

Wildflower gets its name from wildflowers, flowers that grow in the wild whose seeds were not intentionally planted.

Since "Wildflower" does not refer to a single flower, it is hard to tell which specific flower Wildflower is based on. However, it does closely resemble the coltsfoot (Tussilago farfara), a plant in the groundsel tribe in the daisy family Asteraceae, native to Europe and parts of western and central Asia.

As confirmed by the Wildflower class, spawnable Wildflowers' primary weapon is the Stinging Petal, it deals moderate damage at a fair distance and can only fire in bursts of three at a time. Wildflowers will prefer using their primary, backing up when their opponent gets close. 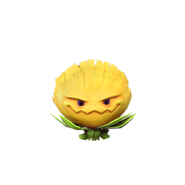