Wild West - Day 9 is the ninth level of Wild West in Plants vs. Zombies 2. It is a Locked and Loaded level. Also, before starting this level, Crazy Dave tells the player about plants for minecarts. The player can use Lightning Reed and Winter Melon in this level, even though both plants have not yet been unlocked. When this level is finished for the first time, the player unlocks Lightning Reed.

The player is presented with two new plants to use in this level. One being the Lightning Reed and the other being the Winter Melon. This level has some tough zombie hordes but is ultimately not too hard, mostly due to the presence of Winter Melon. This plant will greatly help with the oncoming swarms of zombies that appear in this level, as it does massive damage and slowdown. Using Winter Melon on the minecarts is useful, as the player can move it to other lanes to dish out damage. However, it does cost 500 sun to use, and the player must rely on Split Pea and Lightning Reed at the beginning of the level. Split Pea should be used for Prospector Zombie. However, the player should focus on planting at least 2 columns of Lightning Reeds. These do small damage, but have chain damage. Planting lots of these will maximize their damage. Poncho Zombie should be dealt with Chili Bean, especially the one that appears early. Wall-nut should be used to defend, though is not too well at defending this level due to the constant swarm of zombies.

Note: This strategy is for all versions.

Another strategy by MyNameIsMyName. This time he only uses Winter Melon as the offensive plant. 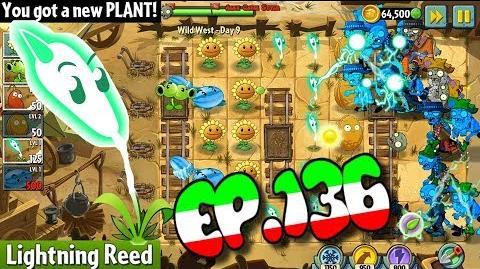 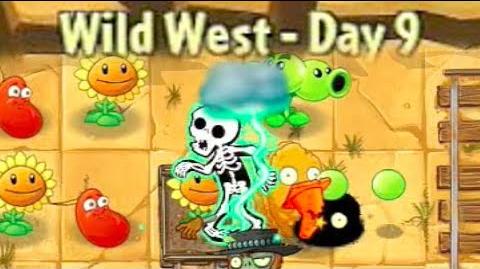 Retrieved from "https://plantsvszombies.fandom.com/wiki/Wild_West_-_Day_9?oldid=2356703"
Community content is available under CC-BY-SA unless otherwise noted.