Survive without any lawn mowers

Wild West - Day 8 is the eighth level of Wild West in Plants vs. Zombies 2. The Wild West Gargantuar and Zombie Bull Rider are first introduced here. When this level is finished for the first time, the player gets a Wild West Piñata.

Pianist Zombies and Wild West Gargantuars are the hardest zombies in this level. The lawn's layout can also prove it as a detrimental too, as three columns are completely occupied by minecarts and rails. However, the player is given plenty of Pea Pods to aid. The indicated thing to do is to put Pea Pod onto a minecart, so huge damage can be delivered to any lane. This is important due to the two Wild West Gargantuars that appear in this level, which needs the player to use Pea Pods to their maximum power. Split Pea is mainly to deal with Prospector Zombie, which can be a nuisance if the player doesn't have enough at their disposal. Chili Bean should be used on Poncho Zombie, as it will help with the grate it could contain. It can also stun Wild West Gargantuar and give more time to finish it off. Wall-nuts will help delay the crowd.

Before the first Pianist Zombie appears

By BF10. I had to spam Plant Food on the first Pianist Zombie

By MyNameIsMyName. Kill the first zombies with Chili Beans while building up Pea Pods army.

Keep planting Pea Pods, especially on the third row and the fifth row to deal with the Wild West Gargantuars 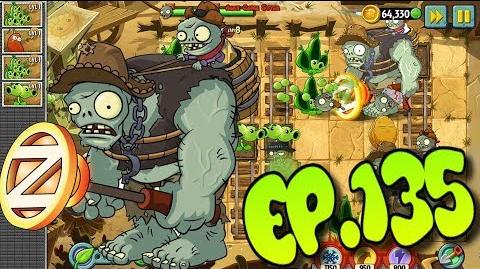 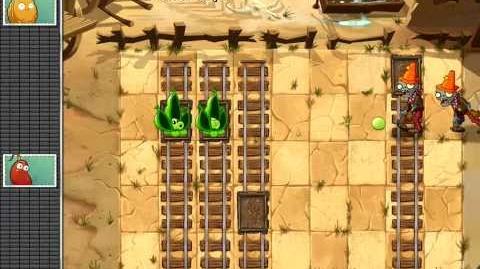 Retrieved from "https://plantsvszombies.fandom.com/wiki/Wild_West_-_Day_8?oldid=2356702"
Community content is available under CC-BY-SA unless otherwise noted.