Plan your defense and defeat the zombies
Prior to the 7.4 update, Wild West - Day 28 was the 28th day of Wild West. The level is both a Last Stand level and a Locked and Loaded level, where the player starts with 600 sun and two Plant Food. Upon completing the level, the player receives a money bag.

First of all, this level is comprised of many dangerous zombies, meaning you will have to serious suppress them so they won't reach your lawn mowers. Additionally, the sun given is insufficient to support a proper defense, being a measly 600. Plus, the plants given cost 100 sun or more, having the maximum amount of plants on the lawn being limited to six. The plants you are provided with also lack crowd control, as Electric Peashooter's damage is too little to fight the density of the zombie horde, and Magnet-shroom's ability only works on Buckethead Cowboys and Poncho Zombies wearing their grates. Zombie Chickens also appear, pressuring the player to fight them using Electric Peashooters. Plus, you can only have up to three Electric Peashooters on the lawn, and if you choose to do that, you cannot leave space for Magnet-shrooms. The presence of Zombie Bulls must be noted, as they can easily overwhelm defenses and charge to the player's house if left unattended. Electric Peashooters do not deal with them in the easiest way, being they need time to overpower them. The Zombie Bull Rider that the Zombie Bull launches will be a bigger problem, as if you don't guard it, it will proceed all the way to the house. They are easily dealt with due to their low health, but do not underestimate their speed. However, Lawn Mowers are still present, so the player may resort to that if they cannot keep watch on a certain them. Power Ups may be used as well, but it is best to use them if there are no more Lawn Mowers in a certain lane. The best option to win easily is to level up your plants, but if you want to do that, you must unlock them. This may be problematic in the case of Electric Peashooter, who is a premium plant and therefore will cost real life money. Magnet-shroom can be easily upgraded due to it being a world plant in Dark Ages, but only if you have the seed packets to do so. Make use of the minecarts to move around Electric Peashooters and Magnet-shrooms to provide more range, as if they are not moved around, some lanes will be unguarded and therefore the zombies there may simply walk to the player's home.

This strategy was created by User:Pvzarif.
The best thing is these plants are level 1, but you will lose at least one lawn mower at the end of this level because this level is impossible to win with level 1 plants. 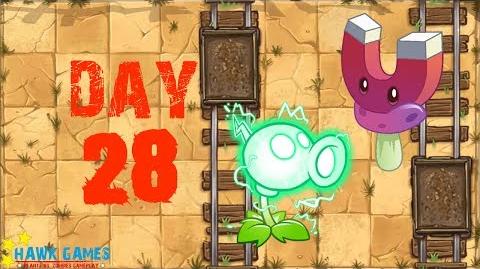 Retrieved from "https://plantsvszombies.fandom.com/wiki/Wild_West_-_Day_28?oldid=2341513"
Community content is available under CC-BY-SA unless otherwise noted.