Don't let the zombies trample the flowers
Prior to the 7.4 update, Wild West - Day 27 was the 27th day of Wild West. In order to win the level, the player must not let the zombies trample the flowers located between the fifth and sixth columns from the left. Additionally, the level is a Special Delivery level. Upon completing the level, the player receives a money bag.

The lawn in this level is filled with Minecarts, much like a Not OK Corral level. However, this level is a Special Delivery level instead, which means that careful precision is required in moving the plants around. Since several zombies may come each wave, smart planning is required to move the minecarts to which some lanes have Pea Pods to attack the zombies, and other lanes have Tall-nuts to defend, or Chili Beans to insta-kill. The Chicken Wrangler Zombies and Pianist Zombies are extra threats, because no AOE plant is given to take care of the Zombie Chickens (the player will have to have more heads of a Pea Pod on, or more Tall-nuts), and no Spikeweeds or Spikerocks are given, (the player will have to have more firepower from Pea Pods to kill the Pianist Zombies). Also, no backwards attacking plants are given, forcing the player to kill Prospector Zombies with Chili Beans. The flowers are also close to the right of the screen, making this level even harder.

+ always has the metal grate.

by MNikoKasah
Add a photo to this gallery 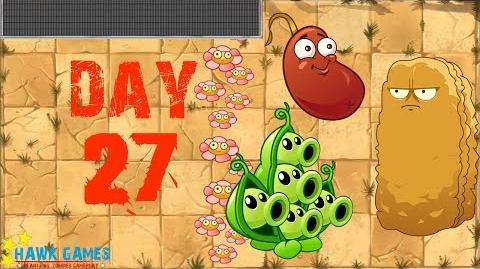 Retrieved from "https://plantsvszombies.fandom.com/wiki/Wild_West_-_Day_27?oldid=2339596"
Community content is available under CC-BY-SA unless otherwise noted.