None; replaced with the Zombot War Wagon’s health bar

A money bag
Wild West - Day 25 is the 25th level of Wild West in Plants vs. Zombies 2. The player must defeat the Zombot War Wagon in this level. When this level is finished for the first time, the player gets the Wild West Trophy.

Melon-pults and Winter Melons are all-powerful plants that the player can have in their arsenal. However, they are limited, hence only a small of number of them are given so that Zombot War Wagon is not defeated easily. Recall that Melon-pult and Winter Melon have a three-by-three radius of splash damage.

Zombot War Wagon not only has a lot of health, but also has a missile attack similar to Zombot Sphinx-inator's. These can target up to three of any player's plants, leaving them susceptible to upcoming zombies. It will frequently use this tactic.

At the second phase, it can call hardened zombies such as Poncho Zombie and Wild West Gargantuar, allowing itself to wait and use its infamous charge and assault.

Finally, at the last phase, it starts to call in Chicken Wrangler Zombies. Since Lightning Reeds are somewhat limited, it may not kill a lot of them when summoned in large groups.

TheGollddMAN's "Chills on the Wheels" strategy

By SerentiyStars364
Add a photo to this gallery 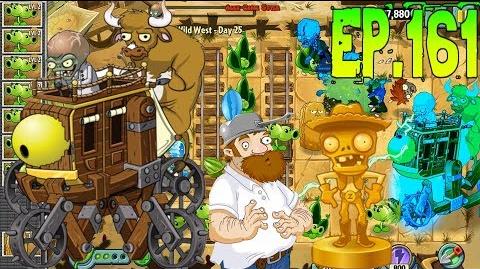 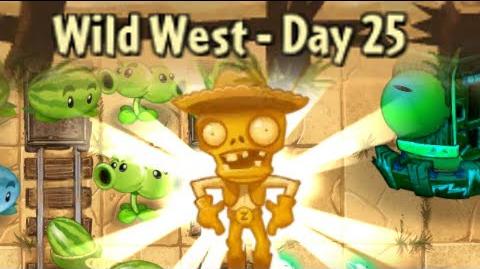 Retrieved from "https://plantsvszombies.fandom.com/wiki/Wild_West_-_Day_25?oldid=2357653"
Community content is available under CC-BY-SA unless otherwise noted.