Survive and protect the endangered plants
Wild West - Day 24 is the 24th level of Wild West in Plants vs. Zombies 2. It is a Save Our Seeds level. To complete this level, the player must protect three Wall-nuts. When this level is finished for the first time, the player unlocks Winter Melon and the boss battle of Wild West.

Consisting of a close set up of endangered Wall-nuts, the player must pay close attention to the position of the Wall-nuts. In addition, there are Chicken Wrangler Zombies, which can release many Zombie Chickens to eat the Wall-nuts in quick succession. In addition, the player must deal with the Zombie Bull, which the player has not seen in many levels. Luckily, the player now has use of Tall-nut, which can easily counter this. Bringing some projectile plants are recommended, or for a close up strategy, close ranged plants.

Plant a column of Twin Sunflowers. While you try getting the economy up, stall incoming zombies with the endangered Wall-nuts. Start planting Laser Beans to kill off zombies in the rows while stalling with Wall-nuts or Tall-nuts. If the first Chicken Wrangler Zombie comes in the row the Wall-nuts are in, plant a Cherry Bomb to kill him and use Plant Food to the endangered Wall-nut in the eighth column. Move the Wall-nuts in their lowest position and plant a Snapdragon behind the middle Wall-nut to kill off zombies. When the first Zombie Bull comes in, put a Snapdragon on the fourth row right in front of the Twin Sunflower. Continue to plant more Snapdragons behind the Wall-nuts and Spikeweeds in front of the Tall-nuts while adding plant food to the Wall-nuts or healing them with Wall-nut First Aid. Plant Cherry Bombs in the fourth row ninth column when there are copious amounts of zombies. If the Tall-nuts look healthy, put a Tall-nut in front of the endangered Wall-nuts without the Plant Food. When the Cherry Bomb is recharged, use it in the final wave.

Plant one row of Primal Sunflowers in the back. Plant one row of Explode-O-Nuts (or other defensive plant) in front of them. Plant a row of Spikerock in front of the Nuts, and then another row at the very right of the lawn. Fill the rest of the lawn with Spikeweed. Move the Wall-nuts away from the Chickens when possible, and use Plant Food if they look damaged (or use Wall-nut First Aid if you brought normal Wall-nuts). If an Imp gets over your defenses, let it eat the Sunflower, then blow it up. On the final wave (or any other time), you can dig up some spikes to make room for explosives.

Note: If an Imp goes unnoticed, you will lose a lawn mower and/or fail the level. KEEP TABS ON THOSE IMPS!

This strategy can complete the level without Plant Food, premium content, gemium plants, or losing lawn mowers. It does, however, require the completion of the "Rescue the Gold Bloom" Epic Quest, if played exactly as described here, though an extra column of Twin Sunflowers in column 2 or 3 can be used instead.

By Satirelol200 (note that Plant Food for Wall-nut is optional)

By ImAThinkNoodlesFan
Add a photo to this gallery 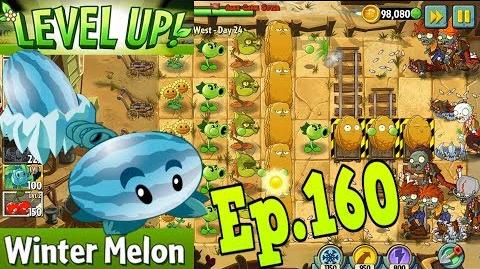 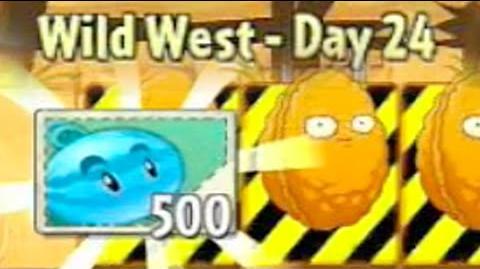 Retrieved from "https://plantsvszombies.fandom.com/wiki/Wild_West_-_Day_24?oldid=2357491"
Community content is available under CC-BY-SA unless otherwise noted.